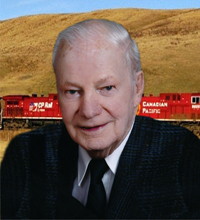 It is with sad hearts that we, the family of Eugene “Beans” John DesHarnais, announce his passing at the St. Joseph’s Home – Carmel Hospice in Medicine Hat on Thursday, October 4, 2018, at the age of 89 years. Eugene was born in Medicine Hat on October 13, 1928, to Vivian and Hector. He married Maureen Gill on March 15, 1972, and resided with her in Medicine Hat until her passing. Eugene will be remembered by his step-daughters, Debbie Hintz, Cindy Good and Patty Henchel and all of their families as well as numerous nieces and nephews. He was predeceased by his wife, Maureen; his parents, Vivian and Hector; brother, Galvin (Doreen) and his sister, Betty Miron. Eugene was a lifetime CPR man, starting at the early age of 18 and continuing through to his retirement in 1988. He enjoyed talking about trains, his life on the CPR and airplanes. If you wanted to start up a conversation with Eugene, all you had to do was bring up one of those topics and you’d be talking for hours. In his earlier years, Eugene enjoyed flying and anything to do with airplanes. He even obtained his pilots license when he was a very young man. Eugene enjoyed going for a beer with friends and you would often find him sharing stories with others at the Legion and later with his friends at Mauro’s. Family extend their appreciation to his special friend, James Brown; to the River Ridge Retirement Home and Masterpiece Retirement Home. A Celebration of Eugene’s life will be held at Cook Southland Funeral Chapel, 901 – 13 Street S.W., Medicine Hat on Tuesday, October 9, 2018, at 2:00 p.m. with Pastor Art Hildebrand officiating and a Private interment following at Hillside Cemetery. A luncheon for all of Eugene’s relatives and friends will be held thereafter in the Canteen at the Royal Canadian Legion, 702 – 2 Street S.E., Medicine Hat from 3:00 p.m. until 5:00 p.m. (Condolences may be expressed by visiting our website at www.cooksouthland.com) If friends so desire, donations in memory of Eugene may be made to the charity of one’s choice. Honoured to serve the family is