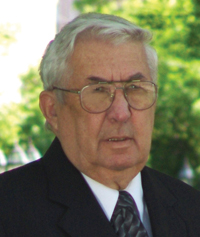 Anton “Tony” Fiitterer of Medicine Hat, beloved husband of the late Anna Fiitterer, passed away on Wednesday, October 17th, 2018 at the age of 84 years. Tony leaves to cherish his memory his children, Terry (Herb) Stickel and Randy Fiitterer; three grandchildren, Scott (Lana) Stickel, Heather Stickel and Brandee (Jon) Anderson; six great- grandchildren, Jade (Dylan), Makayla, Anna, Bekah, Will and Logan; one great great-grandson, Ganon; as well as numerous nieces and nephews. Tony was predeceased by his wife, Anna Fiitterer; his parents, Anton and Anne Fiitterer; two brothers, Alex and Frank; and one sister, Mary. Tony was employed by the City of Medicine Hat Transit for many years, retiring as Operations Manager on October 20th, 1993. Upon his retirement, Tony began working for Saamis Memorial Funeral Chapel from 1994 until 2014. Tony will be missed by all those who were blessed to have known him. Those wishing to pay their respects may do so at SAAMIS MEMORIAL FUNERAL CHAPEL, 1 Dunmore Road SE, on Sunday from 6:00 until 6:55 p.m. and at HOLY FAMILY PARISH, 1451 Strachan Road SE on Monday from 9:30 until 10:25 a.m. Vigil Rites (Prayers) will be held at SAAMIS MEMORIAL FUNERAL CHAPEL on Sunday, October 21st, 2018 at 7:00 p.m. The Funeral Mass will be celebrated at HOLY FAMILY PARISH, on Monday, October 22nd, 2018 at 10:30 a.m. with Father Vijaya Bathineni, Celebrant. A private interment will follow in the Roman Catholic Section at Hillside Cemetery. Memorial gifts in Tony’s memory may be made to the Alberta Heart & Stroke Foundation, 200, 119 – 14th Street NW, Calgary, AB, T1A 7L5 or to the Kidney Foundation of Canada, 6007 – 1A Street SW, Calgary, AB, T2H 0G5. Condolences may be sent through www.saamis.com or to condolences@saamis.com subject heading Tony Fiitterer. Funeral arrangements are entrusted to