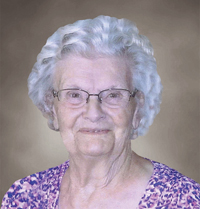 Lorraine Gold (nee Bender) from Medicine Hat, formerly from Maple Creek, passed away Wednesday, October 10, 2018 in St. Joseph’s Home, Medicine Hat, at the age of 92 years. She was predeceased by her husband Alfred Asa Gold in 1994.

Friends who wish to honour Lorraine further may make a donation to the Maple Creek Jasper Centre or to a charity of their own choice. Binkley’s Funeral Service, Maple Creek & Leader entrusted with arrangements. Condolences may be offered to the family at binkleysfuneralservice.com.