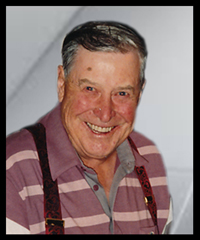 It is with great sadness that the family of Baxter McKinley announces his passing on Monday, October 22, 2018, at the age of 100 years. He leaves behind his beloved wife of 63 years, Beth; his three daughters, Carol, Kathy (Pierre Beaudreau) and Barbara; his grandsons, Daniel Beaudreau and Philip Beaudreau as well as numerous nieces and nephews. Baxter was predeceased by his parents, Percy and Minnie McKinley; sister, Jean Hansen; brothers, Guy, William and Wilbert; cousin, Mary Robertson and nephews, Dick McKinley and John Robertson. Baxter was born and raised on the family ranch in the Wisdom District. At the age of 18, he was sent to technical school in Calgary where he studied to become an electrician. After graduation, Baxter worked for the T. Eaton Company, a job he got by placing an ad in the newspaper. On September 8, 1939, he enlisted in the Canadian Forces Army Signal Corps and was deployed to England and later Europe where he helped liberate the Netherlands. After the war, he returned to the family ranch, operating it in partnership with his brother, Guy and nephews,â€ˆDick and Warren. There he met and married Beth and raised their three daughters. In 1984, Baxter and Beth retired to Medicine Hat and began a long and happy chapter in their lives. They travelled, played bridge and became neighbourhood grandparents to many children on their street. Baxter was a natural athlete who loved curling and golf. He even bowled 10 pin well into his nineties. He will be remembered for his wit, his kind and unselfish nature, but most of all for his love for his family. A Celebration of Baxter’s Life will be held at Cook Southland Funeral Chapel, 901 – 13 Street S.W., Medicine Hat on Saturday, October 27, 2018, at 3:00 p.m. with a time of fellowship to follow in the Cook Southland Reception Facility. (Condolences may be expressed by visiting our website at www.cooksouthland.com) If friends so desire, memorial donations in Baxter’s name may be made directly to World Vision Canada, 1 World Drive, Mississauga, ON., L5T 2Y4 or to the Make A Wish Foundation, 4, 2308 – 24 Street S.W., Calgary, AB., T2T 5H8. Honoured to serve the family is