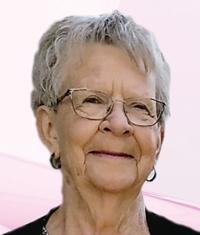 Elizabeth (Betty) Jane Shears was born on April 27, 1938 in Lamont, Alberta. She was baptized March 11, 1940 in their home by her grandfather. Betty grew up in Lamont where she finished high school and moved to Medicine Hat in late 1957. Shortly thereafter, she met Harold Brucker at a local coffee shop. Harold and Betty were married on October 13, 1958. They welcomed their first child, Ronda, in 1959, a son, Randy in 1961, and another son, Gary in 1967. Betty was a remarkable mother and homemaker. Over the years, Betty had many activities and interests in the community and her church. Betty was predeceased by her parents, Robert and Alma Shears (nee Ross); brother, Ross Shears; sister, Louil Keeling (nee Shears) and son, Randy Brucker. She leaves to grieve with hope her loving husband of 60 years, Harold Brucker; daughter; Ronda Brucker (Randall Betker), son, Gary Brucker (Janet), granddaughters, Karmen McNamara (Jim Rabb), Kellie Willie (Keith), Erin Brucker, Natalie Brucker and Claire Brucker; great-granddaughters, Brooke and Mikah Willie as well as numerous family members and friends. Betty entered her eternal home peacefully at St. Joseph’s Home in Medicine Hat, Alberta on October 24, 2018. A Celebration of Betty’s life will be held at St. Paul Lutheran Church, 515 Sprague Way S.E., Medicine Hat on Tuesday, October 30, 2018, at 11:00 a.m. with Pastor Ken Edel officiating. Interment will take place at Hillside Cemetery. (Condolences may be expressed by visiting www.cooksouthland.com) In lieu of flowers, memorial gifts can be made to “St. Paul Lutheran Church Capital Fund” 515 Sprague Way S.E., Medicine Hat, Alberta, T1B 4A7. Honoured to serve the family is