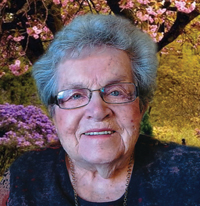 Sadly, the family of Joan Dolman announce her passing on October 24, 2018. She is survived by her daughter, Judy Miller of Medicine Hat; son, David (Margaret) Dolman of Outlook, SK.; three grandchildren, Krista (Mark) Davies, Jann (Solana) Dolman and Tom Dolman; seven great-grandchildren, Zachary and Cameron Miller and their mother, Stephanie Smith; Abbey, Jesse and Jordan Dolman as well as Mathew and Caleb Dolman and their mother, Shantel Dolman. Joan was predeceased by her husband, Beevor in 1995; grandson, Sheldon Miller in 2009; twin sister, Vi Royan in 2012 and her son-in-law, Doug Miller in 2016. A very special thank you goes out to all the staff at the Sunnyside Care Centre who took such special care of Joan during her time there. She will always be remembered as “the Songbird of Sunnyside”! A Funeral Service will be held at a later date in Lumsden, SK. Rest in peace and enjoy the dance. We love you. (Condolences may be expressed by visiting www.cooksouthland.com) Honoured to serve the family is