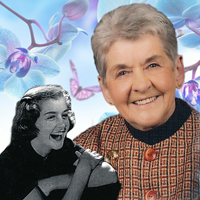 Christine Agnes Staples passed away with her family by her side on Saturday, November 3, 2018, at St. Joseph’s Home – Carmel Hospice in Medicine Hat. Her strong faith made her passing very peaceful. Chris was a sister, wife, mother, grandmother and recently a great-grandmother to Logan and Maxx. She was born in the Empress Hospital on July 6, 1934, to Helen and Louis Mahura. Chris was the third child of what would eventually be seven, growing up on a farm ten miles south of Acadia Valley. She went to Grant School in Acadia Valley and then continued her education at St. Theresa’s School in Medicine Hat. After finishing school, she moved to Calgary and worked as a secretary. On June 30, 1956, Chris married Bob Staples at St. Peter and Paul Church near Acadia Valley. The newlyweds settled into a home in the Social Plains district. The first night at the house was pretty wild when a chivaree was held culminating with her brother Ted, firing off a shotgun a little too close to the house with some of the pellets going through the eavestrough! Life quieted down and Chris settled into the role of farmwife and soon after, a mother. She talked fondly of these years, the kindness of the elderly neighbour ladies freely giving helpful advice on gardening, cooking and raising babies. As the years went by, she became the one giving the advice to the younger generation and she herself perfected more than a few recipes, most notably her homemade buns which if you ever had one and only one, you are the exception. In fact, the only major complaint wasn’t that there was no running water or power at the start, it was rattlesnakes and the dreaded night time trip to the outhouse. Years passed – more babies, good crops, bad crops and a move to a brand-new house with all the modern conveniences. The years of hard work finally paid off in the form of grandchildren who brought so much joy and laughter to Bob and Chris. They made one final move to their retirement home in Medicine Hat and through it all, she remained a dedicated wife and mother to the end. Chris will be sadly missed by her husband of 62 years Bob; her children, Blaine (Leona) and their children, Lewis, Richard and Gerald; Glenda (Allen VandenBerg) and their children, Tolo Auva’a, Kolia Auva’a, Maureen VandenBerg, Eleanor (Michael) Chinook, and their son, Logan; Rob and his children, Jessie (Brad Lepp) and their son Maxx, Olivia (Preston) Mack and Emily and David (Jacquie Compeau). Also missing Chris are her siblings, Don (Maria) Mahura, Bert Mahura, Alouise (Harry) Henderson; brother-in-law, Bud Herman; sister-in-law, Erika Mahura as well as numerous nieces, nephews and extended family. Chris was predeceased by her son, Murray; parents, Louis and Helen; special aunt, Sophie Mahura; brother,Ted Mahura; sisters, Phyllis (Charles) Marten and Bev Herman as well as her sister-in-law, Kathy Muhura. The family wishes to thank all of the medical staff including the EMT’s, doctors, nurses and staff at the Medicine Hat Regional Hospital; and finally to her caregivers at St. Joseph’s Home… her care could not have been any better. Those wishing to pay their respects may do so starting one hour prior to the Vigil Prayers which will be recited at Cook Southland Funeral Chapel, 901 – 13 Street S.W., Medicine Hat on Wednesday, November 14, 2018, at 7:00 p.m. Visitation will be offered again starting one hour prior to the Funeral Mass will be celebrated at St. Patrick’s Roman Catholic Church, 238 – 2 Avenue N.E., Medicine Hat on Thursday, November 15, 2018, at 1:00 p.m. with Father Francis Tran celebrant. Memorial donations in Chris’ name may be made directly to St. Joseph’s Home – Carmel Hospice, 156 – 3 Street S.W., Medicine Hat, AB, T1A 5M; Medicine Hat Public Library, 414 – 1 Street S.E., Medicine Hat, AB, T1A 8G2 or to the charity of one’s choice. (Condolences may be expressed by visiting our website at www.cooksouthland.com) Honoured to serve the family is

One Condolence for “CHRISTINE STAPLES”