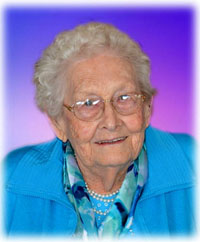 Mrs. Florence Mildred Gust (nee Kreller) beloved wife of the late, Mr. Bruce Gust passed away peacefully at the Medicine Hat Regional Hospital on Wednesday, November 14, 2018, at the age of 100 years. Florence was born on May 23, 1918, and lived on the family farm in the “Social Plains”, Bindloss area. She moved to Medicine Hat to attend school in her teens and later to attend college. Florence met and married Leslie Foster and together they had two children, Wynonna and Leslie. Les was a pilot during WWII and was killed in action. In 1951, she married Bruce Gust and together they had two children, Sam and Elizabeth. Florence and Bruce owned and operated Gust’s Food Store in Medicine Hat for many years. They also purchased a ranch North of the City where they lived until Bruce’s passing in 1979, when she moved back into Medicine Hat. Florence very much enjoyed W.M.S. as well as volunteering for St. John Ambulance, and she was presented the Award of Merit by the Governor General of Canada. She started a widow / widower group called, “Life Goes On” and served as an elder with St. John’s Presbyterian church. For the past 10 years, Florence resided at the River Ridge Senior’s Residence where she enjoyed playing cards, knitting, dancing, music and visiting with friends until her passing. Left to cherish her memory are her children, Elizabeth (Eric) Murray of Calgary, Sam (Cheryl) Gust of Medicine Hat, Leslie Arkley (Jim Hunt) of Calgary, Wynnona (Ron) Goldman of San Diego, CA., USA; grandchildren, Christy Gust (Tom Wilde), Keri Gust (Quentin Randall), Sam (Heather) Gust, Christopher (Brandi) Murray, Michelle Murray, Sue Murray, Rob (Carla) Arkley, David Goldman, Marc (Lindsay) Goldman; 19 great- grandchildren; one great-greatgranddaughter; sisters, Hazel Hall of Calgary and Betty Scarlett of Ottawa; sister-in-law, Frances Woywitka of Edmonton, as well as numerous nieces and nephews. Florence was predeceased by her first husband, Leslie Foster; husband, Bruce Gust; parents, Barney and Isabella Kreller; mother-in-law, Lillian Gust; sister, Velma Barros and four brothers-in-law. The Funeral Service will be conducted at St. John’s Presbyterian Church, 504 – 2 Street S.E., Medicine Hat, on Tuesday, November 20, 2018 at 11:30 a.m. with Reverend Jeff Lackie officiating. Memorial donations in Florence’s name may be made directly to St. John Ambulance, 346 4 Street S.E., Medicine Hat, Alberta T1A 0K2 (Condolences may be expressed by visiting www.cook southland.com) Honoured to serve the family is