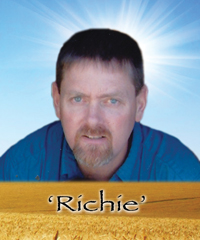 Derik Greg Richardson passed away peacefully surrounded by family on Monday, November 19, 2018, at the Medicine Hat Regional Hospital. Derik is survived by his loving wife of almost 26 years, Jan (Cooke) and daughters, Ailish, Mackenzie and Abigail and the family Schnauzer, “Max”; his mother, Jacqueline; sister-in-law, Ann and her daughters, Jayme and Jodi and their families; son-in-law, Laurie Thomson and his children Callie, Rory and Hailey and their families; sister, Loni (Jimmy) O’Hearne and their children, Cezanne, Christina and Tayler; mother-in-law, Pat Cooke; sister-in-law, Patti (Gord) Forbes and their children, Casey, Kyle and Hilary (Blanchette) and their families; brother-in-law, Darren (Brenda) Cooke and their children, Christopher and Angela. Derik was predeceased by his father Murray; brother, Terrence; sister, Tracy Thomson and father-in-law, Bruce Cooke. Derik was born in Bow Island on July 13, 1961, moving to Medicine Hat before starting school. He attended CHHS and played various sports as a young man, including hockey, baseball, and football. He also played for both the Medicine Hat Cubs and the MHC Rattler hockey teams. He was also a member of the Gallery Lounge Beavers. Derik moved to Calgary briefly as a young man to apprentice as an electrician, but returned to Medicine Hat and worked for Purolator Courier for 32 years. ‘Richie’ was an avid outdoorsman who loved hunting, fishing and camping. When Derik and Jan started their family, his focus became running after their three girls to all their sporting events. They became part of many sport families including CHHS Volleyball/Basketball and Rangers Basketball. There was nothing he loved more than watching his girls kick butt and keeping the officials in line. While Derik endured many serious health issues over the years, he was always a true “Warrior” in his battles. He was diagnosed with Idiopathic Pulmonary Fibrosis (Oct 2017), which he hoped to beat via a lung transplant. Even though he lost both his father and sister to IPF, he took his diagnosis as a true challenge that he met head on. Derik was then diagnosed with aggressive lung cancer on November 12, which due to his lung condition, left no treatment options. He spent the next week enjoying visits from his family and close friends, retaining his sense of humour throughout. The family would like to thank Dr. Charlene Fell of South Health Campus (Calgary), Dr. Osborne, Dr. Monty, Dr. Grobler and Dr. Foley of Medicine Hat. We would especially like to thank the excellent nursing staff on 5 East of the Medicine Hat Regional Hospital for the compassionate care they gave Derik and our entire family. A Celebration of Derik’s Life will be held at Cook Southland Funeral Chapel, 901 – 13 Street S.W., Medicine Hat on Saturday, November 24, 2018, at 11:00 a.m. with Dr. Shane Andrus officiating. Everyone is encouraged to dress in a casual manner… and yes, jeans are acceptable! Private columbarium placement will follow at Hillside Cemetery. In lieu of flowers, donations can be made to the Alberta Lung Association “Breathing Room” in Edmonton, which assist families in being with their loved ones during transplant (www.ab.lung.ca/get-involved/donate) or the Canadian Cancer Society, 200, 325 Manning Road N.E., Calgary, Alberta, T2E 2P5. Please consider organ donation and keep your family apprised of your wishes. You don’t just save a person, you save a family! (Condolences may be expressed by visiting our website at www.cooksouthland.com) Honoured to serve the family is