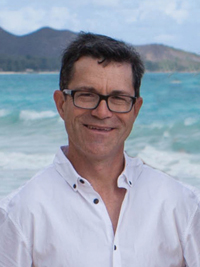 Patrick Anderson of Medicine Hat, beloved husband, father, brother and son, passed away on November 28, 2018 at the age of 51years. Born in Edmonton, Patrick spent his early years in Medicine Hat. At the age of 16 he started speed skating, a sport that would end up setting the course for his life. In 1985, at the age of 18, he moved to Edmonton to pursue his passion for long track speed skating. Patrick was a member of the Alberta Provincial Speed Skating team for a number of years and in 1987 he moved to Calgary to continue his speed skating dream. He attended the University of Calgary and completed a Bachelor of Philosophy degree. From 1992-1994 Patrick was a member of the Canadian National Speed Skating team, upon retiring from competition he took a year to skate in the Netherlands. Upon his return to Calgary Patrick took his massage therapy certification and created his own business, Golden Elbow Massage. This took him on a journey around the world as a therapist with the Canadian National Speed Skating and Bobsleigh Teams, including trips to the Olympics in Nagano, Japan and Salt Lake City, USA. Not only was Patrick a therapist for the team but he also served as a source of great motivation to the speed skating athletes. Many athletes have spoken to the fact that Patrick was so much more than a therapist, that his mentoring and encouragement made the pivotal difference for their performance. In 2001 he returned to Medicine Hat, re-establishing the Golden Elbow Message Clinic, where he felt much satisfaction from helping people regain their quality of life. In 2002, he met Amelia and they were married on October 8, 2005. As a couple they shared their love for the outdoors by mountain biking, skiing, and various wind sports such as kite-skating, kite-skiing and wind-surfing. On March 31, 2009, they welcomed a daughter, Sophia, to the family and on October 9, 2014, a son, Lucas, completed their unit of four. Over the years, the four of them went on many trips, shared outdoor pursuits and loved camping together. Patrick had a distinguished career as an athlete and therapist in high level sport; however, he would say that his greatest accomplishment would be his family. He found great joy in family activities and watching the kids grow, laugh and play. Patrick was a gifted cook that enjoyed making meals for family and friends; he liked making bread, loved baking, could make an excellent cup of coffee and always enjoyed grilling up something delicious in their backyard. He took on the role of being the main nurturer for the family, taking care of every detail, small or large, with great passion. Patrick will forever be remembered for his kind heart and beautiful spirit, infectious smile, wonderful big laugh, quirky sense of humour and even his off-colour jokes. Patrick is pre-deceased by his parents, Floyd and Alwyn. He is survived by his loving wife, Amelia; their two children, Sophia and Lucas, of whom he was so proud; brother Scott; brother-in-law Gasper (Karlea) and their children Jared and Breanna; father-in-law David and mother-in-law Jackie. Vigil Rites (Prayers) will be held at SAAMIS MEMORIAL FUNERAL CHAPEL, #1 Dunmore Road SE, on Sunday, December 2nd, 2018 at 7:00 p.m. The Funeral Mass will be celebrated at ST. PATRICK’S ROMAN CATHOLIC CHURCH, 238 – 2nd Avenue NE, on Monday, December 3rd, 2018 at 1:30 p.m. with Father Tomy Manjaly, Celebrant. Interment will follow in the Roman Catholic Section at Hillside Cemetery. Memorial gifts in Patrick’s memory may be made to KidSport Medicine Hat and Redcliff, 355 Southridge Drive SE, PO Box 40009, Medicine Hat, Alberta, T1B 4S6. Condolences may be sent through www.saamis.com or to condolences@saamis.com subject heading Patrick Anderson. Funeral arrangements are entrusted to