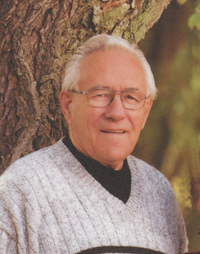 Joseph David Leask of Medicine Hat, husband of Alice “Muriel” Glenn, passed away peacefully in the Medicine Hat Regional Hospital on Monday, November 26th, 2018 at the age of 87 years. Joe will be deeply missed by his son, John (Juliette) Leask; his daughter, Bev Chamberlin; grandchildren, Janelle, Iain, and Opal; great grandchildren, Olivia and Nicholas; his brother, John Leask; as well as numerous nieces and nephews. He was predeceased by his first wife, Mary; his parents, David and Norma; and his siblings, Dick, Mary and Vivien. Joe devoted his early career to his love of teaching. He taught in one-room schoolhouses on the prairies and later in Lac La Ronge. He joined the federal civil service, serving in several capacities in the Departments of Indian and Northern Affairs, and Finance. He retired with 33 years of service. He went on to serve a two-year term as the Deputy Minister of Aboriginal Affairs with the Province of Saskatchewan. He returned to his love of teaching in his mid-sixties. Joe then entered politics and enjoyed two terms as a City Councilor with the City of Kelowna and briefly entered federal politics during the 1998/99 election. Joe will be greatly missed by all who knew him. A Come and Go Celebration will be held at SAAMIS MEMORIAL FUNERAL CHAPEL, 1 Dunmore Road SE, on Wednesday, December 5th, 2018 from 7:00 until 9:00 p.m. Memorial gifts in Joe’s memory may be made to the Alberta Heart & Stroke Foundation, #200 119 – 14th Street NW, Calgary, AB, T1A 7L5. Internment will take place in Kelowna, British Columbia, in May 2019. Condolences may be sent through www.saamis.com or to condolences@saamis.com subject heading Joseph Leask. Funeral arrangements are entrusted to