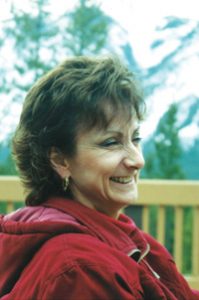 It is with heavy hearts that we announce the peaceful passing of Jenny Jensen, who left this world on Friday, November 30th, 2018, with her cherished children by her side. Jenny leaves to cherish her memory her loving boyfriend, Mike Hickey; son, Jeff (Cheryl) Jensen; daughter, Meagan (Brad) Martin; grandson, Xanon William Jensen; brothers, Xanon (Kayte) Jensen and Jody (Dee) Jensen; and sisters, Jytte (Perry) Olechowski and Jane Looker; as well as numerous nieces and nephews. She was predeceased by her parents, Karl and Kristine Jensen; grandchildren, Zoey Jensen and Zaiden Jensen; brothers, Jack Jensen and Jeff Jensen. Jenny was born March 26, 1955, in Ringsted, Denmark. At two years of age she came to Canada with her parents and two older siblings, settling in Ontario, and later moving to Medicine Hat. Jenny faced many challenges through out her 63 years but was determined to live her life with tenacity and loyalty. She was fiercely independent, despite the physical limitations forced on her as a result of a motor vehicle collision. Her accomplishments were many; both professionally and personally. Jenny was adamant that everyone deserved respect and dignity, she advocated strongly for vulnerable people, and she valued the many friendships that she made wherever she went. Jenny’s children were the greatest benefactors of her positive outlook on life and were her greatest source of pride. She will be sadly missed. A Celebration of Life will be held on Thursday, December 6th, 2018 at SAAMIS MEMORIAL FUNERAL CHAPEL, #1 Dunmore Road SE, at 1:00 p.m. with Diaconal Minister Lila deWaal officiating. Memorial gifts in Jenny’s memory may be made to the The Lung Association Alberta/NWT Division, P.O. Box 4700 Station South, Edmonton, Alberta T6E 9Z9. Condolences may be sent through www.saamis.com or to condolences@sammis.com subject heading Jenny Jensen. Funeral arrangements are entrusted to