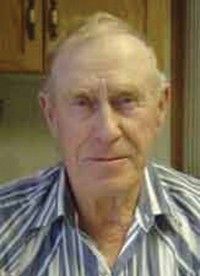 Edwin Gough Matthews, beloved husband of Helga Matthews, passed away in Bow Island on Tuesday, December 4, 2018 at the age of 95 years.

The Funeral Service will be held at the Foremost Community Hall, 802 – 1 Avenue West, Foremost on Tuesday, December 11, 2018 at 2:00 P.M. A private burial will follow at the Nemiskam Cemetery. Condolences may be forwarded by visiting our website at www.southlandfuneral.com.

Besides his loving wife Helga, Gough is survived by their children Cynthia Matthews of Medicine Hat and her family Christopher (Paige) Schlenker and Carter Schlenker; Cyril (Michelle) Matthews of Foremost and their family Kayley and Kaitlin Matthews; Malcolm Matthews (Tricia Kramer) of Foremost and their family Thomas Brazil, Melody Brazil, Hailey Smith, Graham, Walker and Mavrik Matthews; Carrie (Barry) Taylor of Medicine Hat and their family Anna, Brandon and Megan Taylor. He is also survived by his sisters Laura (Derek) Johnson of Taber, Fran (Ron) Hyde of New Westminster, British Columbia and by numerous nieces and nephews.

He was predeceased by his parents Katie (nee Gough) and Edwin Matthews and by his sisters Kathleen (Josef) Bullinger and Helen “Nell” (Tom) Jensen.

Gough was born on the family farm near Nemiskam on June 19, 1923 where he was raised and educated in a one room schoolhouse on the property. On August 8, 1969 he married Helga McFall and together they raised four children on the family farm, where Helga and Gough have remained since.

Gough was known for his quick wit and loved to tease the grandchildren, nieces and nephews. In his youth, his passion was his horses and his dog Trixie, which he spoke of often. When he wasn’t working on the farm, Gough could be found at a dance or an auction sale in Southern Alberta.

One Condolence for “GOUGH MATTHEWS”

Leave a Condolence for Vern Halvorson