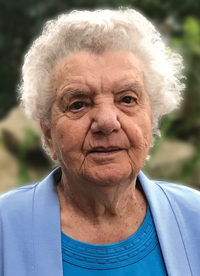 Magdelena Katherine Donick, beloved wife of the late Nick Donick, passed away in Lethbridge on Wednesday, December 5, 2018 at the age of 91 years.

The Funeral Mass will be celebrated at St. Augustine’s Catholic Church, 5009 – 48 Avenue, Taber on Tuesday, December 18, 2018 at 1:00 P.M. Burial to follow at the Taber Memorial Garden. Condolences may be forwarded by visiting our website at www.southlandfuneral.com.

Linda is survived by her daughter Brenda Donick of the Yukon and her children Laurie (Dennis); Bobbi and her children Tyler (Megan) and Tanner; James (Tabitha) and their children Kayleigh and Evan; son-in-law Mike Holland of Lethbridge and his children Raegen and Jessica. She is also survived by one sister Alvina Mason of Maple Creek, Saskatchewan as well as numerous nieces and nephews.

Linda was born on the family homestead near Fox Valley, Saskatchewan. Her early years were marked by learning to be industrious and hard working. Linda trained as a hairdresser in Regina and upon completion started a business in Taber. She fell in love with one of her clients, Nick, and he was attracted to her because he thought she looked like a movie star. They married in May 1949. Linda followed her man and worked in a bakery, while Nick worked in the oil patch in central Alberta. They decided to settle down farming northeast of Taber, where they resided for forty six years. They ran a successful mixed farming and purebred Hereford business before retiring in 2002. Linda was a true partner as she worked outside with every aspect of the farming operation. She was also a terrific cook and baker as well as a meticulous housekeeper.

Linda enjoyed spending time with her family and socializing with her relatives and friends. She liked to travel, gardening, tending to the baby animals and especially caring for her grandchildren. Linda loved each grandchild for their uniqueness.

After Nick passed away, Linda sold her condo and moved into Martha’s House in Lethbridge in 2015, where she has spent her remaining years.