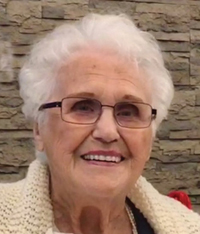 Mrs. Irene Lincoln passed away peacefully on Wednesday, December 19th, 2018 at the Sunnyside Nursing Home at the age of 91 years. She was the youngest of eleven children born to Fredrick and Elizabeth Hiedon on February 21, 1927 in Regina, Saskatchewan. She was predeceased by her husband, Donald in 1988; her only son, Randy in 2015; as well as her parents and siblings. Irene leaves to cherish her memory her daughters, Gloria (Jim) Stubbins, Kathy (Blair) Dyck, Lorna (Wade) Silver; her daughter-in-law Bernice Lincoln; along with fifteen grandchildren; twenty-seven great grandchildren; and two great-great grandchildren. She grew up in Scottsburg on the family farm, and attended the Walsh Valley School from grades one to eight. She worked briefly at the Hodgeville Hotel before marrying her school sweetheart, Donald, on May 30th 1948. They raised their family on the Lincoln homestead until moving to Hodgeville in 1972. Irene began selling Mary Kay Makeup and Michelle Lynn Jewellery, as well as taking in numerous borders from teachers to entertainers. She was a fabulous cook and people raved about her German dishes, which she always had plenty to share with anyone who stopped by. She even cooked for a company who stopped by to build the Pool Elevator in Hodgeville, feeding thirty plus men at a time. As well as being an amazing cook, she was very musical and taught herself to play numerous instruments; her favourites being the piano, organ and accordian. Making sure to finish with “Goodnight Irene” as her closing song every time she played. After Donald passed away, Irene decided to move to Medicine Hat, where she remained until the time of her passing. A celebration of Irene’s life will be held on Sunday, December 23rd, 2018 at 2:00 pm Central Standard Time (CST) at the Hodgeville Community Centre, Main St., Hodgeville, SK, S0H 2B0. Memorial gifts in Irene’s memory may be made to The Champion’s Centre, 435 N Railway St., Medicine Hat, AB T1A 2Z3. Funeral arrangement’s are entrusted to