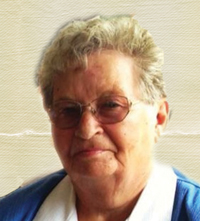 Frances Donelda “Francie” Schnieder, was born on March 2, 1935, in a farmhouse in Southwest Saskatchewan. Her early years were spent working in a bank in Maple Creek, where she met her first husband, Bill. Together, they raised 5 children in Regina, SK, until his passing in 1969. Francie moved to Medicine Hat, AB to be closer to her family where she met Walter Schnieder of Brooks, AB. They were married in 1972 and had a son, Cory. Cory kept her young with his 4H club and hockey. She was always sad to see the season over, as this was her social life in the winter. She had great gatherings with her dear friends and neighbours, Steven and Judy Stockwell and Alan and Sheila Connors. Mom worked hard out in the field, side by side with Walter; fencing, irrigating, branding, weaning, processing calves and all the other hundreds of job that a farm wife had. She was also employed with her good friend, Sandy Massey, at Charlton Auction Service as a cook for many years. She really enjoyed the company of the cattle buyers, distributors, and the crews who worked a long side of her. Mom and Walt retired to Redcliff, AB, in 1999. She had a regular set of ladies that met for cards once a month, reminiscing about the good old days. They resided in Redcliff until they made the move to Cypress View Lodge in September 2017. Here she met a whole new group of friends; playing cards and bingo, working in the Tuck Shop, and listening to live music, which she so loved. Mom was diagnosed with cancer in the spring of ’18. She passed away peacefully with her family by her side on December 19, 2018. Loved ones that cleared the path for Francie, were her first husband, Bill; her son Michael in 2005; daughter, Jill, in 2005; and daughter-in-law, Ruth, in 2018; parents, Everett and Gladys Johnson of Consul, SK; sister and brother-in-law, Shirley and Lawrence Meier of Medicine Hat, AB; brother, Ron Johnson of Consul, SK; and her sister and brother-in-law, Bev and Elmer Gebhart of McCord, SK. Loved ones that will miss Francie until they meet again are her husband of 46 years, Walter; her three sons, Jeff Riddell, Rob (Terri) Riddell, and Cory (Jane) Schneider; daughter, Carol (Barry) Wilson; and step children, Ralph (Patty) Schnieder, Bev Tedford and Don Schnieder. She was extremely proud of her 17 grand-children, 15 great-grandchildren, and 2 great-great- grandchildren. She is also survived by numerous cousins, nieces, and nephews. A memorial service will be held at SAAMIS MEMORIAL FUNERAL CHAPEL, #1 Dunmore Road SE, Medicine Hat, AB on Thursday, December 27, 2018 at 2:00 p.m. Interment will take place in the Spring of 2019 at the family grave site near Consul, SK. Memorial gifts in Francie’s memory may be made to the Jasper Cultural and Historical Centre, 311 Jasper Street, Maple Creek, SK S0N 1N0. Funeral arrangements are entrusted to