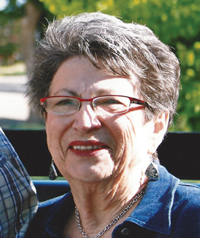 Hilda was born in Herbert, Saskatchewan, but she grew up in Leader and lived all of her life in this little town on the prairie that she knew and loved so much. She grew old in Leader. She became feeble and slowly left us, but she never left Leader. And now her circle of life is complete.

She went to school in Leader through the war years and completed Grade 10 in 1944. She continued her education at Luther College in Regina and graduated from grade 12 in 1946. When she returned from away, she worked as a nursing aide in the hospital for a time before meeting and marrying Fred Kelln in 1947. Hilda was married to Fred until his death in 1986. They raised two children, Kim, born in 1954, and Tammy, born in 1959, in their little house across from the park.

As her children grew, Hilda became restless and decided that the time was right in 1968 to become more than a mother and home maker. With her mother picking up “daycare”, she became the Eaton’s agent in Leader, providing a much needed catalog service to the community.

As the catalog business diminished, she pursued her other passion and became the editor of the Leader News for many years. Hardly impartial, Hilda was a strong advocate for progress and the building of community. She talked passionately about the town and did her best to make sure people were engaged, putting her words into action as a member of the Economic Development Council in the mid 80’s.

Hilda married Eric Richardson in 1988 and they started their new life together as a retired yet active couple in Leader. At about the same time, she decided that she needed to take a more active role in making her home town a better place to live in and was elected to the Town Council from 1988 until 1991.

Completing her active role in the community was her stint on the Lutheran Church Council from 1990 until 1994 when Eric came on Council. Hilda was elected as a Deacon of the church and served as acting chairperson in 1991 for a period of time.

Since being retired just meant more time to serve your community, Hilda was involved with the Leader Housing Authority from 1993 until 2008 and with the Leader Tourism Board from the mid-90’s until 2004. She was always promoting and took great pleasure in taking anyone that looked interested around to all of the tourist sites.

Eventually, retirement had to mean actual retirement and both her and Eric wrapped up a lot of their community involvement, spending more time with family and friends. In the early years of the new millennium, Hilda’s advancing dementia made it difficult to live independently and it became necessary to move into a full care facility in Maple Creek; something that neither of them wanted.

Eric passed away in 2014 and Hilda was devastated. She was much happier when she was able to move back to the Western Senior Citizens Home in Leader. She knew that she was home, although everything else was becoming fainter and further away. The last few years were not kind to Hilda, but at least she was home.

Hilda is predeceased by her parents, Michael and Pauline Migowsky and by her first and second husbands, Fred Kelln and Eric Richardson. She is survived by her sister, Kathleen Anderson; her son and daughter, Kim (Christine) Kelln and Tammy Dietrich; her Grandchildren Jocelyn (Jay), Meagan (Alan Cho) and Graeme Kelln, and Ben (Leanna) and Dan (Courtney) Dietrich; and her Great-Grandchildren Eleanor and Penelope Cho-Kelln, and Sara, Emily, Vienna and Autumn Dietrich.

The funeral service will be held at Trinity Lutheran Church in Leader, on Thursday, January 3rd, 2019, at 11:00 am. Interment will be in the Leader Cemetery.

The family would like to thank all of the doctors, nurses, special care aides, cleaning, laundry and kitchen staff at the Western Senior Citizens Home for all the loving care they gave Hilda over the last several years.

Donations in memory of Hilda can be made to the Leader Ladies Auxiliary care of the Western Senior Citizens Home, Box 129, Leader, SK, S0N 1H0. Online condolences may be offered to the family at binkleysfuneralservice.com