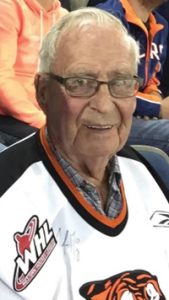 “Jim” Adelbert James Adams, beloved husband of 55 years to Faith Adams of Medicine Hat, passed away on Tuesday, December 25th, 2018 at the age of 84 years. Jim also leaves to cherish his memory two daughters, Kim (Martin) Lafrance and Dawn (Darrell) Bonagofsky; three grandsons, Brendan, Drake and Kieran; his honourary daughter, Pam (Alan) Lafrance; and all those who knew him. Jim was predeceased by his mother, father, infant brother, special aunt, father-in-law, brother-in-law, and many cousins. Jim was born on a farm near Kenaston, Saskatchewan where he grew up. He found a passion for bricklaying from watching out the window at school and he began bricklaying at the age of 19 years in Saskatoon. He then moved to Swift Current and obtained his Pilot License. It was in Swift Current that he met the love of his life, Faith and daughter, Kim. Jim and Faith were married and moved to the Hat. Over the years he worked for Hagbloom Construction, Mel Air, Medicine Hat Brick and Tile (IXL Industries), Time Air (Canadian Regional, Canadian Airlines, Air Canada) as well as many flying schools that he taught at. Jim enjoyed his pilot career where he had the chance to work with many friends and his two daughters along the way. For over 30 years Jim worked with Jim Marshall, whom he thought of as a brother, as a private bricklayer doing brick murals; a highlight of that was a mural in Japan. On retirement, Jim did a lot of work restoring Medalta. He was proud of the home he designed and built on Riverside and the cabin in Washington–he was able to fix anything. Jim loved travelling the world, crop dusting, growing orchids, curling, baseball, hockey, golf and doing anything with his grandchildren. In his retirement Jim and Faith enjoyed Snowbirding to Palm Springs and at the age of 81 years, renovated a 1911 house that they lived in at the time of his passing. He was very honoured by the picture of himself standing on the wing of a plane at the airport. Jim’s family has been told many times that “He was a great man, always thinking about others, and a true friend.” He was a very respectable man who did anything to help others and will be missed dearly by his family and many friends. Vigil Rites (Prayers) will be held at SAAMIS MEMORIAL FUNERAL CHAPEL, #1 Dunmore Road SE, on Friday, January 4th, 2019 at 7:00 p.m. The Funeral Service will be held at HOLY FAMILY PARISH, 1451 Strachan Road SE, on Saturday, January 5th, 2019 at 11:00 a.m. with Father Vijaya Bathineni officiating. Interment will follow at Saamis Prairie View Cemetery. Memorial gifts in Jim’s memory may be made to the Alberta Children’s Hospital, 2888 Shaganappi Trail NW, Calgary, AB T3B 6A8 or to the Canadian Cancer Society, 325 Manning Road NE, Calgary, AB T2E 2P5 or to the Friends of Medalta Society, 713 Medalta Avenue SE, Medicine Hat, AB T1A 3K9. Condolences may be sent through www.saamis.com or to condolences@saamis.com subject heading Jim Adams. Funeral arrangements entrusted to