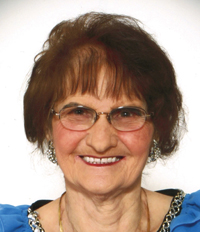 Mrs. Odelia ”Tillie” Krassman, beloved wife of the late Daniel Krassman of Medicine Hat, passed away peacefully on Wednesday, January 2nd, 2019, one month short of her 93rd birthday. Tillie leaves to cherish her memory her daughter, Donna Zahn of Schuler; two grandchildren, Carolyn (Terry) Cey of Medicine Hat and Donny (Jennifer) Zahn of Schuler; four great-grandchildren, Zachary and Danny Cey and Oliver and Leo Zahn; her two sisters; Katie Schafer and Mary van den Brink; as well as numerous nieces and nephews. Tillie was predeceased her husband Dan in 2005; son, Donnie, in infancy; son-in-law, Don Zahn in 2009; parents, Joseph and Helena Bosch; two brothers, Tony (Reta) Bosch and Lucas (Frances) Bosch; three sisters, Anne (George) Besplug, Martha (Emmanuel) Hagel, and Lena (Frank) Schafer; two brothers-in-law, Tony Schafer and Core van den Brink. Tillie was born on February 2, 1926, at Burstall, SK. She married Dan Krassman on November 5, 1945 at St Joseph’s Catholic Church in Schuler, AB. There they began their life together, working side by side breaking land, picking rocks, and building the farm. They worked hard but also played hard, socializing at many community and home functions. Tillie enjoyed being active and over the years played softball, slow pitch, bowling, and curling; skipping a curling team until she was 90 years old. She was very active in St. Joseph’s Parish until 1984, when they moved to Medicine Hat and became members of Holy Family Parish. Travelling extensively with family and friends during the 1980’s, Tillie and Dan created many wonderful memories. At home they enjoyed dancing the polka, playing pool and shuffleboard and during the summer months they enjoyed their swimming pool. Tillie’s greatest joy was her family and she took great pleasure in her grandchildren and her great- grandchildren. Tillie will be remembered for her independence, her energy, her determination, her work ethic, and her love of the outdoors as she was always planting flowers, cutting grass, trimming trees and taking care of her pool in the summer and shoveling snow in the winter. Her life was founded in the Catholic faith. Vigil Rites will be held at SAAMIS MEMORIAL FUNERAL CHAPEL, #1 Dunmore Road SE, on Monday, January 7th, 2019 at 7:00 p.m. The Funeral Mass will be held at HOLY FAMILY PARISH, 1451 Strachan Road SE, on Tuesday, January 8th, 2019 at 11:00 a.m. with Father Vijaya Bathineni officiating. Interment will follow in the Roman Catholic section of Hillside Cemetery. As an expression of sympathy those wishing to remember Mrs. Tillie Krassman may do so by having a mass said, which can be obtained at the Parish office. Condolences may be sent through www.saamis.com or to condolences@saamis.com subject heading Tillie Krassman. Funeral arrangements are entrusted to