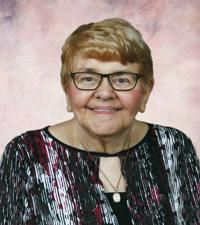 Delphia Joyce was born in Creston, BC, to Einer and Signe Erickson on January 24, 1938, a birthday present for sister, Phyllis. She attended Central School near Tompkins, SK and then high school in Medicine Hat, AB. She studied hairdressing in Calgary, graduating in 1955.

On March 16, 1956 Joyce married the love of her life, Clary Hansvall. Clary and Joyce enjoyed a busy life on the farm raising their children; Kim, Shane, Tex and Heidi. Between the farm, farm animals, four children and a huge garden, Joyce was a very busy lady. The farm was a popular place with company, family and friends always welcome and often stopping in for visits, supper and a game of cards. When Joyce was home you never went away hungry! Joyce enjoyed gardening, quilting, taking pictures and collecting treasures including an impressive spoon collection. She was involved in the Rebekah Lodge, Boy Scouts and the Church. In 1993, Clary and Joyce moved to Medicine Hat to allow Clary to be closer to health care services and Joyce to be closer to her aging Mother. Joyce began housekeeping services, caring not only for homes, but for any needs of her many clients. She enjoyed the fellowship and outings. In Medicine Hat, she was an active member in Unit 2 with Fifth Avenue UCW.

After the fire in the house on New Year’s Day 2004, they settled into condo living at Park Meadows, which meant new friends and card game partners were a plenty. Joyce was a devoted caregiver to many through her years; clients, aunts, uncles, children and grandchildren, but none more special than her beloved Clary. Joyce dedicated many years of 24/7 care to Clary, which kept her young, but most important to them both, allowed him to stay at home right up until the last few months of his life. Joyce enjoyed travelling when she could get away, with trips to Invermere, Toronto, California, Detroit, Ireland, Maui, Vancouver and summers in Cypress Park, among others. She was fortunate and thrilled to be able to visit many of her grandchildren in recent months. Joyce was predeceased by her husband Clary; parents, Einer and Signe Erickson; son-in-law, Paul Turgeon; sisters-in-law Ragnhild Norman, Esther Honsvall, Ruth McMillan, brothers-in-law Harold Honsvall, Arthur Honsvall. She is survived by her four children, Kim (Dave) Turgeon-Hardman, Shane (Shannon) Hansvall, Tex (Carol) Hansvall and Heidi (Kerry) Yuzik; grandchildren, Matthew Turgeon, Mason (Sarah) Turgeon and their daughter, Quinn, Stacey Hansvall (Shayne Felske) and her children, Kieran, Avah and Koen, Chelsey (Eddie) Brown, Keagan Hansvall (Katie) and their children, Masen and Aleeah, Sara (Andrew King) and their son Cillian, Haylee Hansvall, Kyle Hansvall, Cassie Hansvall, Jesse Yuzik, Tori Yuzik (Jon Soroka), Riley Yuzik; two sisters, Phyllis (Maurice) McIlwrick and June (Scott) Harvey; Sister-in-law Lilly Elmgren as well as numerous nieces and nephews. Funeral Services will be held Saturday, January 19, 2019 at 2:00 p.m. at Fifth Avenue Memorial United Church in Medicine Hat, AB with Reverend Dave Pollard officiating. The eulogy will be presented by Dale McIlwrick. Shane Hansvall will be the urn bearer. Honorary Pallbearers are Sterling and Kathy McAlister, Donna and Vic Wickstrom, and Helen Griffith and Gwen McGregor. A family internment service will be held at Memory Gardens in Swift Current, Saskatchewan at a later date. Donations in Joyce’s memory may be made to the Alberta Heart & Stroke Foundation, 200, 119 – 14th Street NW, Calgary, AB, T1A 7L5 or to Fifth Avenue Memorial United Church, 476 4th Street SE, Medicine Hat, AB, T1A 0K9. Funeral arrangements are entrusted to