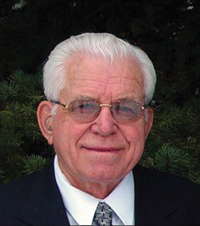 It is with profound sadness that we announce the passing of Joseph Andrew “Joe” Sisko on Tuesday, January 15th, 2019 at the Sunnyside Care Centre. He will be lovingly remembered by his wife Marienne; his children, Judi Ritten (Gayle), Colleen Podesta (Ed Taupert), Renaye Lodge (Rocky), Ian Sisko (Rhonda Pahl), Grant Sisko (Alana Renz); twelve grandchildren, Ryan, Christopher, Jason, Bradley, Tanys, Bethany, Jenae, David, Tyler, Sydney, Brodie and Brian; eight great-grandchildren; his brother, Jack (Paula) Sisko; and his sister, Margaret Joines. Joe was predeceased by his parents, Joseph and Mary Sisko; his brother and sister-in-law, George and Joanne Sisko; and his brother in-law, Dennis Joines. At the age of 18, Joe was called to serve his country in the Army. Following his service, his chosen career was teaching which he loved and excelled at. Many summer were spent attending University in Edmonton and Gonzaga, receiving his B.Ed., M.Ed. and graduate degree in administration. He taught for over 20 years in Medicine Hat where he culminated his career as Principal of St. Louis School. After his retirement, Joe dedicated many hours volunteering and serving the community in countless ways. To mention a few; he was instrumental in organizing the P.A.R.T.Y. program (preventing alcohol related trauma in youth), and attended sessions at the hospital once a week for 15 years. Joe received the Lt. Governor’s Distinguished Service Award for 13 years as the Golden K Kiwanis Club advisor for the K Kids program at Connaught School. In partnership with other members Kiwanians many hours were spent locating, restoring and furnishing the Little Red School House which is located at the Exhibition grounds. Joe was also a member of the Knights of Columbus. He was retired from the Canadian Red Cross Society after giving over 60 units of blood. In 2003, Joe was awarded the City of Medicine Hat Civic Recognition Humanitarian Award. He had a strong faith and served in several ministries in the Church. One of Joe’s favorite pastimes was playing pool with amazing friends, twice a week for over 15 years. Other many pastimes were many different sports and the times he spent playing with his grandchildren and maintaining his fish pond. Joe and Marienne were very fortunate to travel to many countries in the world. They were also blessed to have as very special friends 3 other couples with whom they spent so many enjoyable times together, fondly referred to as the “Crazy Eights”. For almost 2 years now, Joe has called Sunnyside Long Term Care Centre his home. It was so evident that the staff there adored him and treated him as a loved family member. The Funeral Mass will be celebrated at HOLY FAMILY PARISH, 1451 Strachan Road SE, on Monday, January 21st, 2019, at 1:00 p.m with Father Greg Coupal and Father Vijaya Bathineni, Co-Celebrants. If friends so wish, Joe would have appreciated donations in his memory be made to Sunnyside Long Term Care Centre, 1720 Bell Street SW, Medicine Hat, AB, T1A 5G1. Condolences may be sent through www.saamis.com or to condolences@saamis.com subject heading Joe Sisko.