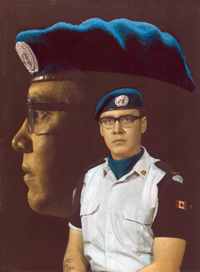 Mr. Terrence “Terry” Daniel Harder, beloved husband of 56 years to Mavis Harder of Medicine Hat passed away on Friday, February 8th, 2019 at the age of 75 years. Terry also leaves to cherish his memory one son, Doug (Deb) Harder; one daughter, Deb (Kelly) Henderson; four grandchildren, Ryan (Alisha) Henderson, Bryce (Lindsay) Henderson, Hayley Henderson and Nick Grunwald; five great grandchildren, Josh Grunwald, Emma Henderson, Wesley Henderson, Kaiden Henderson and Rhett Henderson; two brothers, Dennis Harder and Randi Harder; one brother-in-law, Tom (Myrna) Burnell; two sisters-in-law, Shirley (Arnold) Wruck and Marni (Barry) Hodgins; as well as numerous nieces and nephews. Terry was predeceased by his parents, Daniel and Harriott Harder; one brother, Rick Harder; one brother-in-law, Larry Burnell; and one sister-in-law, Lois Harder. Terry served with the Canadian Military, worked in the oil patch and most recently worked as a Grounds Keeper at the Medicine Hat Golf and Country Club. He enjoyed playing golf and loved watching his grandchildren’s sporting activities. Terry will be missed by all those who knew and loved him. The family would like to send a special thanks to Dr. Woodley and the nurses on 5 East. Honouring Terry’s wishes, no formal funeral service will be held. Memorial gifts in Terry’s memory may be made to the Canadian Cancer Society, 325 Manning Road NE, Calgary, Alberta, T2E 2P5. Condolences may be sent through www.saamis.com or to condolences@saamis.com subject heading Terry Harder. Funeral arrangements are entrusted to

Leave a Condolence for Loretta Garrett