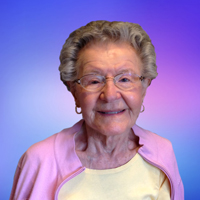 Mrs. Annie Mary Humbert (nee Glaser), beloved wife of the late Delbert Humbert, passed away peacefully a St. Joseph’s Home – Carmel Hospice in Medicine Hat on Wednesday, March 6, 2019, at the age of 91 years. Anne was born in Fox Valley, SK., on August 2, 1927, to George and Elizabeth Glaser. She married Delbert Humbert in 1955, in Calgary. Anne was a faithful and devoted member of St. Patrick’s Roman Catholic Church and sang in the choir for many years. She enjoyed sewing, baking, football and knew more about hockey than most hockey players. She was a devoted Medicine Hat Tigers fan and season ticket holder for 40 years. Anne’s memory will be forever treasured in the hearts of her family: daughter, Rhonda Humbert and son-in-law, Todd Haase and their dog, Murphie; grandchildren, Melissa, Jason, Amanda (Ryan) and Jordan (Alex); great-grandchildren, Liam, Jordan, Monique, Carter, Korry and Harper; nieces, Connie (Ted), Dory (Neil), Catherine (Stan) and Debbie; nephews, Warren (Sheila), Brian (Sandy), Scott (Ev), Sean (Mia) and Robin. Anne was predeceased by her husband, Delbert; son, Wayne and his partner, Debbie; parents, George and Elizabeth Glaser; brothers and their wives, Tony (Olive), Delmer (Bertha) and Floyd (Gerry). The Funeral Mass will be celebrated at St. Patrick’s Roman Catholic Church, 238 – 2 Avenue, N.E., Medicine Hat on Thursday, March 14, 2019, at 11:00 a.m., with Reverend Father Tomy Manjaly celebrant. Interment will take place later in the Spring. (Condolences may be expressed by visiting our website at www.cooksouthland.com) If friends so desire, memorial tributes in Anne’s name may be made directly to the Heart and Stroke Foundation of Alberta, 340A Maple Avenue S.E., Medicine Hat, Alberta T1A 7L5. Honoured to serve the family is