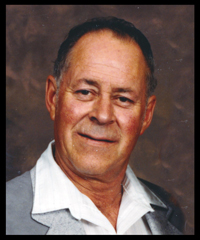 Lucien ‘Lucky’ Louis Goddu, beloved husband of Lorna, passed away peacefully at the St. Joseph’s Home – Carmel Hospice in Medicine Hat on Sunday, March 10, 2019, at the age of 86 years. Lucien was born on June 21, 1932, in Frenchville, Saskatchewan where he was raised and farmed with his family until he met his wife, Lorna. He and Lorna moved to Swift Current where he began his career working in automotive and raising seven children. The family later made a move to Medicine Hat where he gained employment as an mechanic at OK Tire before opening his own business, Lucky & Sons Alignment. Lucien loved his family and spending time in the outdoors going camping and walking his dogs, Kita and Cisco. He also enjoyed Blue Jays baseball, curling and with his feisty nature, debate on almost every subject which of course included cars. He was a die hard Ford man and he made sure he let his kids know about it! Lucien will be deeply missed by his wife of 64 years, Lorna; sons, Mike, Connie (Tara), Greg (Shawn) and Jeff; daughters, Teresa (Jim) Lawrence and Laurie (Kim) Thome; grandchildren, Brett, Cody, Corey (Kelsey), Chris (Julia), Justin (Jessica), Shandee (Tyler) and Dakota (Mike) and Ryley; great-grandchildren, Caisie, Cayden, Izzy, Austin and Freyja; one sister, four brothers as well as numerous nieces and nephews. He was predeceased by his daughter, Cindy (Ed) Kopp; parents, Albert and Annette Goddu as well as Lorna’s parents, Tim and Johanna Christiansen. “We are so incredibly thankful for the amazing care he received at St. Joseph’s Home – Carmel Hospice. Their compassion and thoughtfulness with our dad gave us such peace of mind…we thank you.” A family celebration of Lucien’s life will be held at a later date. (Condolences may be expressed by visiting our website at www.cooksouthland.com) Memorial donations in Lucien’s name may be made directly to St. Joseph’s Home Carmel Hospice, 156 – 3rd Street N.E., Medicine Hat, Alberta, T1A 5M1 or to the SPCA, 55 Southwest Drive S.W., Medicine Hat, Alberta, T1A 8E8. Honoured to serve the family is

Leave a Condolence for Bob and Yvonne Kuttnick