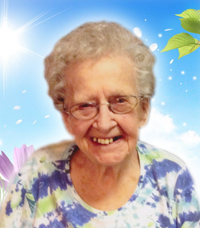 Alberta May Thompson passed away peacefully on Friday, March 29, 2019, at the age of 100 years. At the time of her passing she was a resident of the AgeCare Valleyview Seniors Community, where she had been living for the past 10 years. Alberta is survived her daughter, Jacqueline Bishop (Patrick) of Medicine Hat; her son, Barry Thompson of Edmonton as well as grandsons, Stephen Bishop (Eva) of Paris, France, Ian Bishop of Medicine Hat, and Christopher Thompson (Yuan) of Ottawa, Ontario. She is also survived by her great-grandson, Léonard Bishop of Paris, France; great-granddaughter, Alina Thompson of Ottawa, Ontario as well as many cherished family members in both Canada and England. Alberta was predeceased by her husband, John (Jack) Thompson, her son, Robert Thompson; daughter-in-law, Edna Thompson; brothers, Earl and Ronald Gillett and sister, Grace Swanson. Alberta was born in Medicine Hat and attended Alexandra High School before going on to work at the glass factory in Redcliff and the Medicine Hat Greenhouse. It was there, tending the roses in the greenhouse that sparked Alberta’s lifelong passion for gardening. She loved her flowers and her garden was always beautiful! Alberta met the love of her life at a dance in Medicine Hat. John (Jack) Thompson was stationed in Medicine Hat as a member of the Number 34 Service Flying Training School which was part of the British Commonwealth Air Training Plan. Jack and Alberta were married in May of 1943, but soon after their union John was sent back into active duty in England. Alberta was pregnant with their first child, Bob at that time, and as fate would have it, the pair were not reunited until their son was two years old. When the war ended, Alberta travelled by train with her toddler to Halifax where she boarded a ship bound for England to be reunited with her husband. This was quite an undertaking for a woman who had never travelled more than a few hundred miles from home. Leaving her friends and family behind, she bravely made her way to her new life in England, making friends along the way with other women who were also travelling to join their husbands. Alberta and Jack lived in England for two years before returning to Canada; first to Vauxhall and then to Edmonton a few years later. They were married for 60 years and all through their marriage they loved to dance, especially ballroom dancing. They were such beautiful dancers that people would stop to watch them as they gracefully glided across the dance floor. Alberta was a devoted mother and a wonderful homemaker, focusing all of her attention on making her home a happy and warm place. She loved company and cooked many delicious meals for friends and family. When she wasn’t cooking, caring for kids or tending to her garden, Alberta wrote poetry about special events in the lives of her friends and family. She was a kind and caring person who would go out of her way to lend a helping hand to those in need. Alberta never had an unkind word for anyone and always saw the good in everyone she met. She never complained about anything or anyone at any time. She truly was an is an inspiration! Special thanks go out to Dr. Bratvold for his kindness and compassion throughout mom’s later years. He would always take the time to talk and listen to her and she always had a sparkle in her eye in his presence. Thanks also go out to the staff at AgeCare Valleyview for their excellent and dedicated care. Those wishing to pay their respects may do so at Cook Southland Funeral Chapel, , 901 – 13 Street S.W., Medicine Hat on Friday, April 5, 2019, between 7:00 p.m and 8:00 p.m. The Graveside Service will be held at Hillside Cemetery, Medicine Hat, on Saturday April, 6, 2019, at 11:00 a.m. with Reverend David Pollard officiating. Those wishing to attend are invited to gather at Cook Southland Funeral Chapel between 10:30 a.m. – 10:50 a.m. to join the procession to the ceme tery. (Condolences may be expressed by visiting www.cooksouthland.com) Memorial donations in Alberta’s name may be made directly to the SPCA, 55 Southwest Drive S.W., Medicine Hat, Alberta, T1A 8E8. Honoured to serve the family is