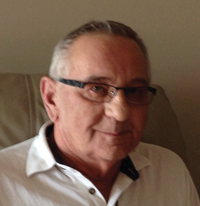 Ken Fandrick of Dunmore, AB passed away, in his home, on Friday April 12, 2019 at the age of 70 years. Ken was born on July 24, 1948 in Leader, SK. He was raised on a farm near Richmound, SK along with four other siblings. He met his wife Connie (Peters) in grade school, and they married in 1970. Ken took a two-year Automotive Technology course at SAIT in Calgary, AB. He worked at Shaw Trucks as a heavy-duty mechanic for a couple years after graduating and soon became a service manager. He also started his own skid steer excavation business. In 1977, Ken and Connie purchased some farmland near his father’s farm, which was also his grandparents homestead. Ken, Connie and the children moved out to the Richmound, SK area in 1977 to begin grain farming. Ken eventually took over his parents and uncle’s farms and continued to farm until around 2001 when his two sons took over the operation. All who knew him, including his wife, children, grandchildren, siblings and numerous friends and neighbours, will cherish Ken’s quiet gentleness, compassion and generosity forever. As per Ken’s wishes there will be no services. In lieu of flowers, memorial gifts can be made to the Alberta Heart and Stroke Foundation, #200 119 – 14th Street NW, Calgary, AB T1A 7L5. Arrangements are entrusted to