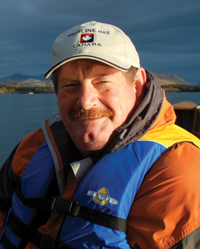 Dr. Brent Slobodin, a dedicated husband, loving father, historian, rock and roll fanatic, and community builder passed from sudden renal failure on April 15, 2019 at the age of 61, in Whitehorse, Yukon. Brent was born in Medicine Hat, found his heart in Kingston, and made a home in Whitehorse.

Brent is survived by his wife Megan (née McDonald), his sons Conal (Quinn Slobodin); of Ottawa, and Kieran (Andrea Davidson) of Toronto, his beloved granddaughter Freya, his siblings Belinda Benn, Debra Wickham (Dean), and Darrell Slobodin (Rhonda) of Medicine Hat, his best friend Piers McDonald (Ofelia Andrade) of Whitehorse, and a large extended family throughout the country. Brent was predeceased by his parents, Thomas and Patsy Slobodin of Medicine Hat.

Brent was born May 25, 1957. A boisterous child, voracious reader, and intrepid young man, his passion for history and sport consumed him. Brent earned his PhD in History and Foreign Policy from Queen’s University in Kingston, Ontario. It was there, at graduate school where he met and fell in love with Megan, who became his wife (August 7, 1982) and lifelong companion.

Brent was, first and foremost, a thinker. He loved debating politics and holding forth on history and music. He dedicated his career to advancing education, devolution, and training in the territory. He was a champion for First Nation education and self- governance and was integral to the creation of the territory’s immigration and labour market landscape. Brent was the Yukon Appointee for the National Historic Sites and Monuments Board in 2017.

Everyone remembering Brent talks about how he encouraged them in one way or another to get involved in something grander than themselves.

Anyone who met Brent knew he cared about his community and its history. A lifelong proponent of the Yukon’s Heritage, he led efforts at all levels of government to preserve its history and culture. He was a passionate community activist and worked tirelessly for affordable housing and education. He loved and had deep care for animals, always concerned for creatures most in need. After all, he was a hapless Habs, Jays and Cowboys fan to the end.

Brent was most invested in his family. If there is one accomplishment by which he would want to be remembered, it would be his sons. They are his proudest legacies. He lives on through them, and instilled in them the value of community involvement, hard work, and fatherhood.

A Celebration of Life was held April 25, 2019 at the Coast High Country Inn Ballroom in Whitehorse, Yukon. In lieu of flowers, donations can be made in Brent’s name to the Yukon Humane Society: https://www.canadahelps.org/en/charities/humane-society-yukon/