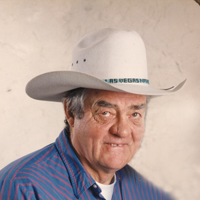 John Harvey “Jack” Williams passed away on Wednesday, May 2nd, 2019 at the age of 86 years. John leaves to cherish his memory his children, Lee (Monty) Shannon, Ken (Kelly) Williams, and Pam (Neil) Fode; grandchildren, Jason Thomson, Michelle (Dave Roberts) Thomson, Cassie (Chris Nickel) Williams, Jamie (Jeremy Manko) Williams, Dru Williams, Jeff (Kristy) Fode, Courtney (Andrew Goodrich) Fode, Shayann (Jordan) Jacksteit,; great-grandchildren, Jaylin Merek, Bryleigh, Hayven, Beck, Vann, Marley, and Jack; and numerous nieces and nephews. John was predeceased by his loving wife, Norma; parents, “Bud” and “Dot” Williams; brother, Don Williams; sisters, Faye Kinsman and Margaret Watson. Jack lived in Langdon on the family farm and went to school there, riding on horseback to and from school (yes, uphill both ways). At the age of 15 years; although his Dad wanted him to come work off the shore of Central America on the rigs with him, he was too young and had to settle for working on land rigs. (Jack always said his first job was shooting woodpeckers from the derrick). He met Norma, and in 1955, they ran off to get hitched in Havre, MT. They made their first home in Pincher Creek, AB, where he worked at the Shell plant. Later on, they moved to Calgary and had a farm where the Deerfoot mall now stands. At that time, Jack was driving truck for Shell up North. Jack and Norma always had riding horses and often went to Montana to buy horses off of the bucking strings. They would break them; both for themselves and to sell. Jack and Norma participated in local Gymkhanas and, in 1962, they were the top male/female competitors. They went on many trail rides; two significant ones being the Centennial Trail Ride from Waterton to Calgary and the endurance ride from Eastend, SK to Medicine Hat. During this time Jack worked for the Alberta Brewery Association where he drove delivery truck for 16 years. As the kids came along, they joined the “cowboy way of life”; riding and enjoying their horses as a family. In 1971, the family moved to Carstairs, AB. Bill and Joan Ullery rented their second house on the home place. Bill, Paul Barnes, and Billy Aikens helped them to build a roping arena, start the Carstairs Roping Club, and just like that, Jack’s love of roping began. Ken joined Jack as his roping partner and “Granny” joined in by being in the timing booth and in the arena as a flagger. In 1976, they moved to Duchess, AB. Jack and Ken continued roping and there they were associated with many clubs. Jack won two saddles and numerous buckles; just to name a few rewards he reaped from his beloved hobby. He was always willing to mentor and lend a helping hand to help anyone get started in roping. He especially enjoyed helping the young guys. He roped with them when no one else would and was even know to spot a few fees along the way. Everyone far and wide knew Odie and her friend “old Jack”. From Duchess, Jack and Norma moved to Medicine Hat. Jack worked for Inland Concrete, collecting awards and good driver bonuses along the way, and making friends wherever he went. Following his retirement, he enjoyed solving the world’s problems with the crowd around the breakfast table at Rustlers and then, Whiskey Creek. He tended to his beloved black colt, Twist, and made sure, Gussy, “the white wolf”, got his share of bacon. Jack greatly appreciated the special group who joined him every Wednesday for lunch and sharing. His greatest joy and comfort, were his kids, grandchildren, and great- grandchildren. The friendship and dedication of his longtime friend, Corey, was one of his greatest treasures. A Celebration of Jack’s Life will be held at Medicine Hat Exhibition and Stampede Grounds Higdon Hall on Thursday, May 9th, 2019 at 2:00 p.m. In lieu of flowers, those wishing to show their respect, may donate to the Blair Stroh Cowboys for Kids, in Jack’s name. Condolences may be sent through www.saamis.com or to condolences@saamis.com subject heading Jack Williams. Funeral arrangements are entrusted to