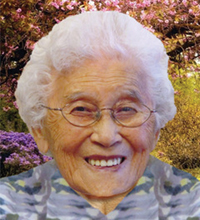 Tayeko Hashizume passed away peacefully in Medicine Hat on Tuesday, February 5, 2019, at the age of 99 years. She was born the 3rd of 8 children to Kuniyoshi and Misue Mori in Abbotsford, BC., on April 18, 1919. Tay will be lovingly remembered by her five children: Ruth Erickson of Atascadero, CA, Grace (Fred) Takagi of Vernon, BC, Robert (Gitta) of Medicine Hat, Howard (Alice) of Medicine Hat and Reginald (Laurie) of Victoria, BC; eleven grandchildren: Jeffrey (Heather) Takagi, Cary Hashizume (Keith Lehman), Kevin Takagi, Bryce Hashizume, Marnie (Ryan) Doig, Robin Erickson, Tomiko Johnson (Duhane Lam), Jennifer Hashizume Lee (Chris Gregory), Kimiko Erickson, Michael Hashizume, Matthew Hashizume (Olga Pidhirska) as well as seven great-grandchildren: Madison Lee, Lola Doig, Adalia Doig, Van Doig, Abigail Takagi, Bracken Takagi and Kieran Lam. She is also survived by three sisters. Tay was predeceased by her daughter, Ann Johnson, son-in-law, Eric Erickson, a daughter in infancy as well as three brothers and one sister. During her lifetime, Tay lived in Abbotsford, Mission City, Lethbridge, Diamond City, rural Taber and 70 years in Medicine Hat. She was married with two daughters when WWII broke out and Canadian-born Japanese Canadians were forcibly evacuated from the Fraser Valley. To stay together as a family they chose to relocate to Southern Alberta and help farm sugar beets, enduring harsh conditions. In 1949, the family moved to Medicine Hat when the wartime restrictions (regarding property purchase and travel for Japanese Canadians) were lifted. Tay helped pioneer irrigated farming in Southern Alberta, growing potatoes, onions and corn as well as growing test plots for the Lethbridge and Brooks Agriculture Experimental Stations. In 1973, she sold her dry land property to her newly formed company, Town and Country Packers, and captured the potato packaging market in the Medicine Hat area, serving all wholesale outlets and keeping very busy all year round. Tay officially retired from farming in 1989 – 90 and continued her volunteer activities. A member of the Medicine Hat Quota Club since 1964, Tay also has been a member of the Medicine Hat Business and Professional Women’s Club since 1978. From 1986 to 1989, she was a board member for Alberta Culture and Multiculturalism. Tay’s proudest volunteer achievement was being awarded one of 25 “Citation for Citizenship” certificates from the Federal Government in 1991 for her efforts to promote multiculturalism through the Medicine Hat Multicultural Folk Arts Council which was presented at a special ceremony in Ottawa. Tay’s many years of volunteering received many other local, provincial and federal honours. The family would like to thank Riverview Care Centre for the care provided to Tay during her final months. A Celebration of Tay’s life will be held at Cook Southland Funeral Chapel, 901 – 13 Street S.W., Medicine Hat on Saturday, May 18, 2019, at 2:00 p.m. with a time of fellowship and refreshments thereafter in the Cook Southland Reception Facility. (Condolences may be expressed by visiting www.cooksouthland.com) If friends so desire, memorial tributes may be made to the charity of one’s choice. Honoured to serve the family is