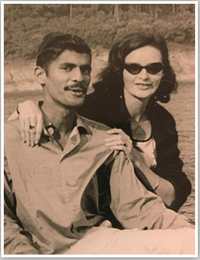 An outstanding figure who enriched the lives of many in the community of Medicine Hat, Alberta, for over 40 years, passed away suddenly on Saturday, May 11, 2019 in Cochrane, Alberta.

Joe Santos was born on February 7, 1939 and raised in Bombay (Mumbai), India. His family heritage hailed from the predominantly catholic state of Goa. To his articulate and elegant family members in Goa and Bombay he was affectionately known as “Joe-boy”.

Joe is survived by his beautiful and loving wife of 55 years, Irene; son Paul (Marina); daughter Pamela (Chris); proud grandsons Lewis and Evan; younger sister Prisca (Walter) Fernandes; niece Joanita; nephews Sonjoy, Floyd, Glenn, and Dion. He will be fondly remembered by all of his in-laws from the McAtear and McCafferty families in Scotland and England.

He was somewhat of a “career and cultural polymath”; he was educated, enjoyed life, and contributed to the culture in three different countries; India, United Kingdom, and Canada where he was a chef-de-cuisine, welder/ foreman, and finally a high school teacher.

He obtained his B.Ed at age 45 in 1984 and was so pleased when he secured a full time position at Medicine Hat High School in 1992. After retirement, he was a regular fixture on the substitute circuit until he was 76 years old!! He was well respected and loved by his students, neighbours, soccer players, and those who benefitted from his assistance and friendship. To many he was quite simply a gentleman, scholar, and Renaissance man.

Always the giver and never the taker, Joe was known for his warm-heartedness, exceeding generosity, infectious smile, and unyielding desire to advance the fortunes of others, particularly those on the down side of advantage. He was a ubiquitous and prominent figure in the volunteer community: a successful boys and girls soccer coach, director, and vice president in the Medicine Hat Minor Soccer Association; active member in the catholic community assisting many refugees and immigrants of all walks with the challenges of being a newcomer; and numerous other pursuits related to the well-being of others.

Joe’s final four years with Irene were spent in Calgary being close to daughter Pamela and the medical expertise that was required due to his aortic stenosis and onsetting dementia – leaving his neighbours and social network in Medicine Hat was challenging for him.

Funeral Mass will be celebrated at St. Peter’s Roman Catholic Church (541 Silvergrove Drive NW, Calgary, AB) on Saturday, May 18, 2019 at 1:00 p.m. with Rev. Brian Hubka officiating. Reception to follow in the Church Hall. Condolences may be forwarded through www.McInnisandHolloway.com.

If friends so desire, the family encourages memorial donations to a charity of their choice.

Joe’s family wishes to thank the staff of the cardiology and neurology teams at the Foothills Hospital and all of the medical community that attended to him.

Leave a Condolence for Angie Waldner