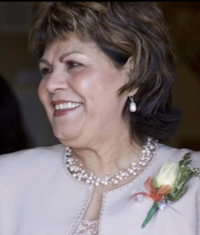 It is with heavy hearts that we announce the passing of Erlinda Del Carmen Urbina in the early hours of June 5, 2019 in Medicine Hat, AB, surrounded in love by her children. Erlinda was a woman of faith and it was her faith in the Lord Jesus Christ that carried her through to the end. To all whom she loved and loved her – family, church family, and friends; she was known simply as “Mamita” or “Mita”. Mita was born in San Fernando, Nicaragua on Aug 8, 1944. She lived a simple life alongside her brothers and sisters and she spoke fondly of times spent with them out in the fields eating fresh fruit from a plethora of tropical trees. Because of the political unrest and civil war in Nicaragua, Mita uprooted her kids and immigrated to Canada in 1988. Since her arrival, she began to build a life in Medicine Hat. Her greatest joy was finally having all her sons and daughters with her. She loved her children and grandchildren. To her family, Mita was a quiet permeating presence and was a gentle, kind and compassionate soul. She was both a mother and a father. Mita leaves to cherish her memory her children, Martin Gurdian Jr. (predeceased), Jose (Carmen) Gurdian, Marlyn (Ryan) Lemire, Herenia (Abel) Rojas, Miguel Martin (Diana) Gurdian, Raul Gurdian, Ivan (Joselin) Gurdian, Cristina (Jorge) Morales, and Noe (Veronica) Gurdian; her grandchildren, Jose-Martin Gurdian, David-Ivan (Adriana) Gurdian, Rebeca (Richard) Stock, Esteban (Karlene) Gurdian, Daniel Gurdian, Lazaro (Elizabeth) Duarte, Remi Lemire, Heber (Dana) Castillo, Abdiel Castillo, Emanuel Rojas, Carmen Erlinda Gurdian (predeceased), Gabriel-Martin Gurdian, Moises-Isai Gurdian, Elbetia-Topacio Gurdian, Joel Amos Gurdian, Amy Gurdian, Azalia Gurdian, Andrea Morales, Gabriela Morales, Adriana Morales, Noah Gurdian, Jacob Gurdian, Naomi Gurdian, Macayla Stewart Gurdian, and Erenia Yasmina Guevara Rivera; eight great-grandchildren; four brothers and six sisters (in Nicaragua); and numerous nephews and nieces. She will be greatly missed by all her family and friends. Those wishing to pay their respects (closed casket) may do so at SAAMIS MEMORIAL FUNERAL CHAPEL, 1 Dunmore Road SE, on Friday, June 14th, 2019 from 7:00 until 9:00 p.m. The Funeral Service will be held at MEDICINE HAT FAMILY CHURCH, 534 – 18th Street SW, on Saturday, June 15th, 2019 at 11:00 a.m. with Pastor José Gurdian and Pastor Pablo Reyes co-officiating. The interment will follow at Saamis Prairie View Cemetery with a reception to follow at the Medicine Hat Lodge, Saamis Ballroom, 1051 Ross Glen Drive SE. Memorial gifts in Erlinda’s memory may be made to the Carmel Hospice at St. Joseph’s Home, 156 – 3rd Street NE, Medicine Hat, Alberta, T1A 5M1. Condolences may be sent through www.saamis.com or to condolences@saamis.com subject heading Erlinda Urbina. Funeral arrangements are entrusted to