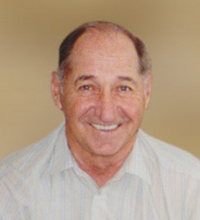 Frederick Theodore Schmidt of Medicine Hat passed away peacefully at St. Joseph’s Home – Carmel Hospice on Wednesday, June 5, 2019, at the age of 85 years. Fred is survived by his beloved wife of 66 years, Anita; two daughters, Janet (Dave) and Susan (Claude); daughters-in-law, Tara and Wanda; grandchildren, Trevor, Katie, Chelsea, Lindsay, Cody and Steven as well as great-grandchildren, Oliver, Aven, Luke and Ivy. Also left to mourn his passing are two sisters, Rosie (Cubby) and Evelyn (George). He was predeceased by his parents, Fred and Zepherina; sons, Jigger and Fred and granddaughter Miranda. Fred was born in Winnipeg on June 23, 1933 and resided in Fisher Branch, Manitoba where he met Anita. They were married on April 6, 1953. Fred had a grocery store and butcher shop there before going into the hotel/motel business in Medicine Hat in 1972. He was passionate about sports and he actively participated in curling, baseball, hockey and golf through which he developed many life-long friends. He was definitely “King of the one-liners” and had an engaging sense of humour. The family is extremely grateful to St. Joseph’s Hospice and the wonderful nurses and staff who gave Fred the most dignified and compassionate care in his final days. In accordance with Fred’s wishes, a Private Family Service and interment will be held at a later date. (Condolences may be expressed by visiting our website at www.cooksouthland.com) If friends so desire, memorial donations in Fred’s name may be made directly to the Canadian Cancer Society, 200 – 325 Manning Road N.E., Calgary, Alberta, T2E 2P5 or to the Parkinson Association of Alberta, 101 – 928 Allowance Avenue S.E., Medicine Hat, Alberta, T1A 3G7. Honoured to serve the family is