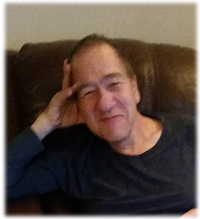 It is with sadness that the family of Wade Ernest (Leskiw) Wolfe announces his passing at the Peter Lougheed Centre in Calgary on Wednesday, June 19, 2019, at the age of 61 years. Wade attended school in Medicine Hat at George P. Vanier then moved to Calgary and went to Colonel Sanders and Lynwood School in Winnipeg before returning back to Calgary to finish his education again at Colonel Sanders. Following his graduation from school he worked as a machine operator at Standen’s Springs and Steel in Calgary until September 1996. Wade had a natural ability from a very young age to repair or tinker with anything that had a motor especially a radio, watch or record player as well as cars. He had a passion for collecting anything and everything and multiples of any one item. Wade loved animals of any kind and enjoyed watching Dr. Pol. He loved his Dachsund, Micky who was his constant companion. Wade was a gentle, kind person with a sense of justice and loved to make people happy while enjoying a good laugh and telling stories. He will be lovingly remembered by his step-mother, Marian Leskiw; sisters, Cynthia (Harold) Bice and Petrina Tellstone; nephews, Chris (Candace) Bice and Corey (Erin) Bice; nieces, Ashley Tellstone; twins, a nephew, Jesse Bonaparte and a niece, Haileigh Bonaparte; great-nieces, Quinn and Aria; aunts, Lisette, Darlene, Gladys and numerous cousins. Wade will be remembered by long time special friends, Bettie Lewis and Brent Nichols. He was predeceased by his birth father, Edward Leskiw; grandmother, Mary Leskiw; his birth mother, Arlene Delzer; and step father, Peter Wolfe. A special thank you to special helpers, Elena, Rod and Dan. The Celebration of Wade’s life will be held at Cook Southland Funeral Chapel, 901 – 13 Street S.W., Medicine Hat on Wednesday, June 26, 2019, at 2:00 p.m., with Life Celebrant Gerry Getz officiating. Interment to follow at Hillside Cemetery. If friends so desire, memorial donations in Wade’s name may be made directly to the APARC, 1002 South Railway Street S.W., Medicine Hat, AB. T1A 2W2. (Condolences may be expressed by visiting our website at www.cooksouthland.com) Honoured to serve the family is