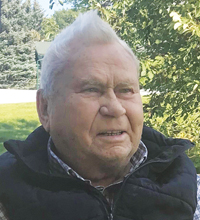 Otto Templin of Medicine Hat, beloved husband of the late Ursula Templin, passed away peacefully on Monday, June 24th, 2019 at the age of 97 years. Otto leaves to cherish his memory his daughter, Susan Lawrence of Medicine Hat; grandchildren, Chris (Krista) Lawrence and Sarah (Dustin) Theberge of Calgary; and his two great- grandchildren, Amy Theberge and Charlie Theberge, also of Calgary. Otto was predeceased by his wife, Ursula Templin; his parents, Rudolf and Wanda Templin; his brother, Rudolf Templin; and his sister, Lydia Templin. Otto was born on May 8th, 1922 in Zweimuhlen, Poland. Before coming to Canada, he served in the German army and became a Russian prisoner of war. It was while he was confined that he learned Russian and became a translator. In 1956, Otto married Ursula Toborek, and soon after they welcomed a daughter, Susan. Carpentry work was his passion and Otto was fortunate to be able to earn a living and provide for his family while enjoying his much-loved hobby. He was fortunate to be able to maintain all his rental properties until his passing. He always kept busy and was often heard saying, “Always going forth and back!” His family was especially important to him and he devoted as much time with them as he could. When he wasn’t feeling well, Otto alleged that family was his best medicine. He will be genuinely missed by all those who knew and loved him. In keeping with his wishes, a private family graveside service will be held at Hillside Cemetery with Gary W. Goran officiating. Memorial gifts in Otto’s memory may be made to the charity of one’s choice. Condolences may be sent through www.saamis.com or to condolences@saamis.com subject heading Otto Templin. Funeral arrangements are entrusted to