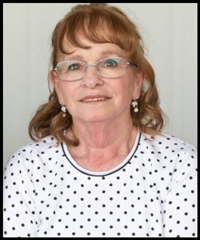 It is with great sadness that the family announces the passing of Shirley Ann Bauer, beloved wife, mother and grandmother at St. Joseph’s Home – Carmel Hospice in Medicine Hat, on Wednesday, July 3, 2019, at the age of 69 years. Shirley was born on April 28, 1950, at the Medicine Hat General Hospital. She was raised in Schuler on the family farm before her marriage to Melvin Bauer on November 8, 1968. They moved and lived on another farm in Saskatchewan where they raised their three children, Tina, Wanetta and Melvin Jr. They moved to Alberta and bought a farm on the outskirts of Medicine Hat where they built a new home. She retired in Medicine Hat with her partner, Paul Johnston and occasionally worked at her daughter’s store during her retirement. Shirley loved spending time with her family and always had her dogs, Cindy and Molly by her side. From farming to floral design and her fondness for gardening, Shirley’s beautiful flowers were always the topic of discussion. A special thank you to all the caregivers who helped her fight her cancer and especially for their support throughout this difficult time. Shirley will forever be remembered in the hearts of her family; her partner of 18 years, Paul Johnston; her mother, Helen Aberle; her children, daughter, Tina Bauer and her children, Erika (Ken) Morrison their children Alexis & Ryker , Kendra (Stetson) Schlosser; son, Melvin (Jenny) Bauer and his children, Mason & Greyson , Caitlyn Bauer and her children, Jaxson & Elaina; Nicola (Tyler ) Bauer, their children Alec & Aithen; daughter, Wanetta Biggs (Darcy) and her children, Danielle Biggs (Spencer) and their son, Nolan Carr; Madison Biggs (Brandon); Paul’s children, Rebecca Johnston (Ashley), her children, Jhanna & Brooklyn; and Rodney Johnston (Ashley) and his son, Dainen. Shirley will be remembered by her siblings, Dennis (Carol), Eddie (Judy), Jerry (Brenda), Ross (Cindy), Tracy as well as numerous nieces and nephews. Shirley was predeceased by her father, Kasper Aberle and son-in-law, Daniel Biggs Jr., and two grandchildren, Diana and Maximus. The family will celebrate Shirley’s life with a time of silent reflection. Donations can be made directly to the Medicine Hat SPCA, 55 Southwest Dr. S.W., Medicine Hat, Alberta, T1A 8E8 or to the Medicine Hat & District Health Foundation (Margery E. Yuill Cancer Centre), 666 – 5th Street S.W., Medicine Hat, Alberta, T1A 4H6. (Condolences may be expressed by visiting our website at www.cooksouthland.com) Honoured to serve the family is

One Condolence for “SHIRLEY BAUER”