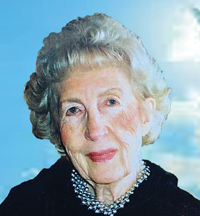 Passed away on July 22, 2019. Ms. Isobel Juanita Srubowich of Medicine Hat at the age of 94 years. She was born in Medicine Hat on June 28, 1925. She leaves to mourn her passing three children, Tara (Mike Rackham) Higgins of Winnipeg, MB; Tonia (Bruce) Morgan of Ottawa, ON; and Stephen (Connie Johnson) Srubowich of Medicine Hat, AB. She is mourned by seven grandchildren, Richard (Samantha) Kaus of Cleavleys,U.K., Kyle Brinkley (Dayna Evans) of Brandon, MB and Katrina Rackham of Winnipeg, MB; Natasha Pedro (Art Bowles) of Ottawa, ON and Justin Pedro of Gatineau, PQ; and Danielle and Cameron Srubowich of Medicine Hat, AB. And also by two great-grandchildren, Mila Rose and Zoey Belle Pedro of Gatineau, PQ. Ms. Srubowich is also survived by relatives in Ontario, Scotland, England and Australia. She will be deeply missed by her grey companion cat Grady, 12. Mom completed all her schooling in the Hat attending Toronto Street School, Earl Kitchener and graduating from Alexandra School. During her childhood years in the river valley she learned to swim in the river, and skate on it during cold months. She was an avid dancer and received three years of piano lessons. She also became one of the first Hat women to take welding lessons. In her 50’s she took Spanish lessons at the Hat college. In 1951 she adventurously drove up the new and rugged Alaska Highway deep into the Yukon. The following year, she boldly turned her wheel down to Oakland, California. After successfully graduating from the Garbutt Business College, she held a number of secretarial positions in Medicine Hat, Lethbridge and CFB Suffield. Amongst her notable positions were at the Canada Employment office, lawyers, Medicine Hat public school division and Defence Research Establishment Suffield on two occasions. She lived the majority of her life in Medicine Hat but lived briefly in Lethbridge and Calgary. Mom was a strong advocate for animals and their protection and rights. She had countless pet dogs and cats over her lifetime. She was a voracious reader and had a wide range of literary interests running from her love of animals to the Far North, China and European history. Ms. Srubowich was predeceased by her parents, mother Amy Williamson, 84, in 1969 and father Bill Williamson, 96, in 1985. She was also predeceased by her husband Alex Srubowich passed away in 1994. The memorial service will be held at SAAMIS MEMORIAL FUNERAL CHAPEL, #1 Dunmore Road SE, on Friday, July 26th, 2019 at 1:30 p.m. In lieu of flowers, donations can be made to The Humane Society or to The Salvation Army. Condolences for the family may be sent to www.saamis.com or to condolences@saamis.com subject heading Isobel Srubowich. Funeral arrangements are entrusted to