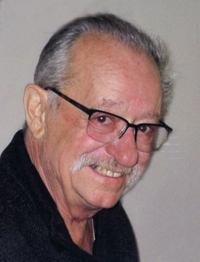 On Monday, July 29th, 2019, Leo Cornet, passed away in the arms of his love, Diane, at St. Joseph’s Carmel Hospice. Leo also leaves to cherish his memory his children, Matthew (Patricia) Cornet and Jessica (Joey) Thiessen; grandchildren, Waylon Cornet and Dylan Cornet; brothers, Robert (Toni) and Maurice (Pearl); sister, Julie; and Diane’s family, daughter, Bonnie (Jason), son Marc; and her grandchildren, Matt, Kaiden, Aiden and Naish. Leo was predeceased by the mother of his children, Sandra; his parents, Rene and Annette; and his brother, Daniel. Leo was born in Spiritwood, Saskatchewan on November 22, 1947, to Rene and Annette Cornet, and was the third child in a family of five. In 1959, the family moved to Medicine Hat and this is where Leo spent most of his years. Leo loved life. He had an infectious smile and he loved music. From the early days playing with the Crescendos, the River Bottom Band and then Springfield, and then to the past few years with his buds in Caught Red Handed. Music was his passion and he played his harps and sang wherever he travelled; from Huatulco to Montego Bay to winters spent near Quartzite, Arizona. He also enjoyed fishing and was thrilled when he landed his huge sailfish and Dorado in Mexico as well as many a walleye at Calling Lake. Leo was responsible for starting the Saturday Jams at the Royal Hotel which over the years became famous across Canada. He was also one of the first few riders in the original Santa Claus Toy Run. Only one week ago, on July 20th, Leo was humbled by his friends and family that came out for his One Last Jam at the Redcliff Hylton. Leo was surrounded with an aura of joy as he played his harps and sang with fellow musicians and reminisced with friends. This was Leo’s wish and we are so thankful to everyone for making it happen. Our little buddy is now playing music in heaven. The family would like to thank all of Leo’s caregivers for the love and support offered to Leo and his family during his time of illness. In keeping with Leo’s wishes, no funeral or memorial service will be held. Memorial gifts in Leo’s memory may be made to Canadian Cancer Society, 325 Manning Road NE, Calgary, AB, T2E 2P5 Condolences may be sent through www.saamis.com or to condolences@saamis.com subject heading Leo Cornet. Funeral arrangements are entrusted to