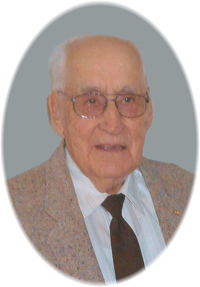 Jacob (Jack) Janke of Brooks, beloved husband of the late Adeline Janke, passed away in Medicine Hat on Sunday, July 28th, 2019 at the age of 93 years. Jack was born in Walsh, Alberta on May 15th, 1926 to Jacob and Lydia Janke. He married Adeline Deoring on April 2nd, 1949 in Medicine Hat and resided in Brooks. Jack had many different jobs during his working years. He worked on a threshing crew in Hanna, farmed in Antelope Creek as well as worked in the pottery industry in Medicine Hat. Jack also worked at the Ogilvie Flour Mill in Medicine Hat and at the Bow City Coal mine, as well as Charlton’s Cattle Auction, Bow Slope Shipping and Diane’s Interior in Brooks. He also drove school bus in Brooks, did the mail run in Rainier, Scandia and Bow City and was an established carpenter in the Brooks Area. Jack will be fondly remembered for his love of music, many family members as well as residents of Brooks received a tape or CD that he had recorded and he played at many functions in the area. He was part of the Volunteer Outreach in Brooks. Jack was predeceased by his loving wife Adeline; parents Jacob and Lydia Janke and siblings Art, Emil, Rueben, Alfred, Gustov, Christina and Irene. He is survived by his 4 children; Leona Damsgaard of Medicine Hat, Marion (Ken) Onheliger of Medicine Hat, Ron (Sharee) Janke of Brooks and Sandra Janke of Brooks; grandchildren, Norma Damsgaard, Terry Damsgaard (Kevin), Rhonda (David) Hochheimer, Jason Onheliger (Dixie), Dustin Janke and Jennifer Janke; great grandchildren, Thomas, Kayla, Courtney, Tanisha, Kade, Danika, Chase, Austin and Ruby; great great grandson Benjamin; sisters in law, Freda and Evelyn Janke of Brooks and Grace Yanke of Medicine Hat and many nieces and nephews.Funeral services will be held on Friday, August 2nd at 2:00 PM from the Brooks Evangelical Free Church. Pastor Garth Everett officiating. Interment to follow at Brooks Cemetery. In memory of Jack, if friends desire, memorial tributes may be made to Alzheimer Association of Alberta, 10531 Kingsway Avenue, Edmonton, Alberta T1A 0K7. Funeral arrangements entrusted to: SMITH FUNERAL HOME LTD. AND CREMATORIUM BROOKS, ALBERTA. Condolences may be forwarded through www.sfh.ca. Telephone 403-362-4636 or Toll Free (866) 362-4652