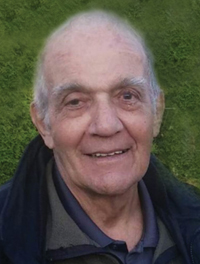 Dad was born on March 26th, in Gleichen, AB to parents Amie and Jean Plante. He was the oldest of four children. He was predeceased by his parents along with the love of his life, Peggy in 2017; son, Jim in 2016; and brother, Ed Plante in 2016. He is survived by son, Tom (Debbie) Plante; daughter, Laurel (Ken) Solheim; grandchildren, Ashley Plante, Stephanie Plante, Michelle Plante, Tyler Plante, April (Justin) Way, Sherri Plante, Aaron (Shae-Lee) Solheim, and Brett Solheim; great-grandchildren, Sutter Way and Eva Way; sisters, Mary Ellen (Armand) Corbiell and Carol Plante; and numerous nieces and nephews. Dad grew up in the small community of Gleichen, AB, where he enjoyed a normal childhood of school and sports. It was also where he developed his ability to have fun, of which some of the stories are legendary. He excelled in both hockey and baseball, but it was hockey that brought him to Medicine Hat in 1952 to play for the original Medicine Hat Tigers hockey club, where he played for two seasons. In his career he played for the Tigers, Spokane Flyers, Drumheller Miners, and various Medicine Hat senior hockey clubs. Dad won numerous awards and All-Star nominations throughout his career and was offered a contract by the Boston Bruins to play professional hockey but while he was banking at a local Royal Bank, in the Fall of 1953, he met who turned out to be the love of his life, Peggy Morrison. His career goals changed, and they were married on June 18, 1955. They spent 63 years together until Mom’s passing in December of 2017. They raised a family, starting with their son, Jim, in January of 1956. Tom arrived on the scene in September of 1958, and Laurel completed their family in October of 1964. Dad worked as a butcher for a period at Gust’s food store but in 1960 he started working at the new Goodyear plant where he worked his way to Production Foreman until his retirement in January of 1991. He was a hard worker and a dedicated employee for 31 years and was a big influence on many family members who also have contributed to the success of the plant. After his retirement, he held part-time jobs at the Royal Hotel Beer Store and Cottonwood Coulee Golf Course. Dad was an avid sportsman. He was involved in both hockey and baseball as a coach, was on a six-man canoe team, and even bit the ear of a horse in a wild horse race at the Medicine Hat Stampede. He was one of the driving forces behind bringing professional baseball to Medicine Hat in the form of the Pioneer Baseball League in 1977. The Oakland A’s affiliate team played for one season and were followed by the Toronto Blue Jays from 1978 to 2002. He held various positions with the teams including general manager and concession manager. Mom and Dad also ran the Gas City Hockey School for several years and Dad spent many years along side Bob Ridley as a color man on Tiger radio broadcasts. Dad loved his family and especially his eight grandchildren with which he held a special bond. He was always there for them with guidance and never-ending love. He will be sadly missed by each of them. He will also be missed by his furry companion, Tookie, who was always by his side. The family would like to thank Dr. Jeraj, Dr. Foley, and Dr. Ahmad; the Margery E. Yuill Cancer Center; the Kidney Care Center; the health care aides at the Wellington Retirement Residence; and St. Joseph’s Carmel Hospice for their treatment and unending support of our Dad and Grandfather. A Celebration of Dad’s life will be held at SAAMIS MEMORIAL FUNERAL CHAPEL, #1 Dunmore Road SE, Medicine Hat, AB T1A 1Z5 on Monday, August 26th, 2019 at 11:00 a.m. with Gary W. Goran officiating. Memorial gifts, in lieu of flowers, may be made to the Carmel Hospice at St. Joseph’s Home, 156 – 3rd Street NE, Medicine Hat, Alberta, T1A 5M1 or to the Margery E. Yuill Cancer Centre. Medicine Hat Regional Hospital, 666 5 St SW, Medicine Hat, AB T1A 4H6. Condolences may be sent through www.saamis.com or to condolences@saamis.com subject heading Lawrence Plante. Funeral arrangements are entrusted to