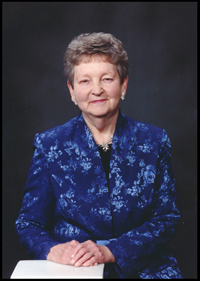 Ruby Helene Martha Hirch of Bow Island, beloved wife of the late Ed Hirch, has gone to be with her Lord passing away at the Bow Island Health Centre on Friday, August 23, 2019, at the age of 83 years. After graduating from the Galt School of Nursing, she married the love of her life Edmund Hirch in 1956. In 1963, they moved to Bow Island where they farmed for over 54 years. Ruby will be lovingly remembered by her three children: Richard (Barbara), David (Janet) and Christine (Darren) as well as eight grandchildren. Along with her beloved husband Ed, Ruby was predeceased by their daughter, Paula. A Celebration of Ruby’s life will be held at Zion Lutheran Church, 104 – 2 Avenue West, Bow Island, on Saturday, August 31, 2019, at 2:00 p.m. Interment will follow at the Bow Island Cemetery with a luncheon thereafter at the Royal Canadian Legion, 202 – 5 Avenue East, Bow Island. Memorial donations in Ruby’s name may be made directly to the Canadian Lutheran World Relief, #600 – 177 Lombard Avenue, Winnipeg, MB, R3B 0W5 or to the Bow Island and District Health Foundation, P.O. Bag 3990, Bow Island, Alberta, T0K 0G0. (Condolences may be expressed by visiting our website at www.cooksouthland.com) Honoured to serve the family is