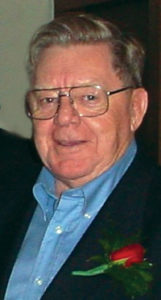 Roger John Clayton Hagen of Medicine Hat, beloved husband of Isla Hagen, passed away on Thursday, August 29th, 2019 at the age of 87 years. Roger leaves to cherish his memory his memory his wife, Isla Hagen; daughter, Sandra Hagen; son, Roger “Bud” (Marguerite) Hagen; grandchildren, Ryan (Allison Atwell) Morkin, Jacelyn Morkin, and Eric (Jessica Pelland) Hagen; great-grandchildren, Nolan, Owen and Julien Morkin and Desiray Pelland, Freya and Isla Hagen; and numerous nieces and nephews. He was predeceased by his parents, John and Margaret Hagen; and siblings, Frances Firth, Ellen Ferguson, Jean Hardy, and Evelyn Trithart. Roger was born, the fourth of five children, on March 19, 1932 in Galahad, AB and was the only son. He had a beautiful voice and as a youth could always be found singing or whistling a tune. He met, and then later married Isla, and together they raised their two children, Sandra and Roger “Bud”. Roger spent most of his life working in the oil and gas industry. His favourite career in the field was as a Land Consultant, which is what he continued to do until his retirement. Roger worked until he was 80 years old. He loved to meet and talk to people. He was a true gentleman and had a witty sense of humour, much to the amusement of the many people that he met throughout his life. He loved to hunt, fish, and golf; and he took his last hunting trip in 2017 at the age of 85.

He was kind and generous and he loved his grandchildren and great- grandchildren. He was always there for them when they needed him. He will be deeply missed by the many that knew and loved him. Roger’s family would like to thank the nurses and staff at Carmel Hospice at St. Joseph’s Home, who treated him with such compassion, kindness, and dignity. A memorial service in Roger’s honour will be held at a later date in Forestburg, Alberta. Memorial gifts, in lieu of flowers, in Roger’s memory, may be made to the Carmel Hospice at St. Joseph’s Home, 156 – 3rd Street NE, Medicine Hat, Alberta, T1A 5M1. Condolences may be sent through www.saamis.com or to condolences@saamis.com subject heading Roger Hagen. Funeral arrangements are entrusted to