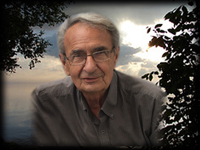 Deeply saddened, Hilda Mueller announces the passing of her beloved husband, Walter Mueller on Saturday, August 31, 2019, at the age of 83 years. Grieving are his much loved stepchildren: Michelle, Stewart, Heather (David), Robin (Ron) and Ava. Missing their Opa are grandchildren: Kirsten, Lauren, Samuel, William and Ella and great-grandson, Jack. Also left to mourn his passing are his brothers and best friends, Horst (Delores) Mueller and Heinz Mueller; Walter’s nieces and nephews and their children, Shelley (Doug) Hamilton and sons, Cole and Reed, Kerri Mueller and sons, Tate and Seth, Lori (Dan) Svoboda, Richard (Maria) Mueller and sons Max, Quinn and Grayson, David (Michelle) Mueller and sons, Cameron and Brian and Robert (Gaia) Mueller all of whom loved Walter and whom he loved with equal measure. Dear to Walter’s heart is his very special Aunt Trudy and her family. Many happy times were spent with brothers and sisters-in-law, Adolf (Margaret) Roth, Helen (Karl) Tessman, Kay (Helmut) Kroll, Norman (Sharon) Frank and Violet Roth. Coffee was always on for his loyal coffee partners as well as for Walter’s dear long-time friend and A&W buddy, Harry Zeller. Walter was predeceased by his loving parents, Edmund and Olga Mueller; sister, Rita; sisters-in-law, Susan Mueller, Anna Fisher and Rose Frank as well as his brothers-in-law, Ron Shurvell and Gottlieb Roth. Walter was born on January 1, 1936, to Edmund and Olga Mueller in Makowisko (Wolshebuden) Poland. In 1945, the family had to flee their war-torn homeland and relocated to Northern Germany. There, Walter received his education and certification as a millwright and machinist. After eight years, the family opted to make Canada their new home, settling in Medicine Hat in 1953. Walter was a young man with many dreams and aspirations. After brief stints at CPR, flour mills and other short-term jobs, while at the same time perfecting his new English speaking skills, Walter was confident and eager to strike out on his own. He began by opening the first automated car wash in Medicine Hat, followed by owning and operating other establishments and real estate holdings at various times. In 1991, he purchased and restored the former Eaton’s building in downtown Medicine Hat and renamed it the Gaslight Plaza. It is now a historic landmark for the city. Walter, along with his wife, loved to sing and mingle with his friends and revisiting his German roots by being a member of the German Canadian Harmony Choir and Club of which he was President for a number of years. Walter and Hilda hosted many choir picnics in their backyard. Bringing family and friends together in their yard for food, music and possibly a swim was one of Walter’s greatest joys. Walter loved God, his family and friends. He had a special fondness for Medicine Hat often mentioning that he would not have wanted to live anywhere else. It was the city that helped him achieve his dreams and where he built his life. Walter was thankful and content. In 2017, dementia became a part of his and his family’s lives. Sunnyview became Walter’s care center, always with his wife by his side. The family would like to thank the nurses and caregivers for their kind and committed care. They are truly angels amongst us. Many thanks to Dr. Hirsch and Dr. Simpson for their expertise. Thank you to Pastor Bob Church and his wife, Wanda for their uplifting hymns, prayers and words of encouragement that brought great comfort.

‘We love you always. Rest easy; til we meet again.’

Those wishing to pay their respects may do so at Cook Southland Funeral Chapel, 901 – 13 Street S.W., Medicine Hat on Monday, September 9, 2019, from 7:00 p.m. until 8:00 p.m. A Celebration of Walter’s life will be held at Cook Southland Funeral Chapel on Tuesday, September 10, 2019, at 11:00 a.m. with Pastor Bob Church officiating. Private interment will follow at Hillside Cemetery. In lieu of flowers, memorial donations in Walter’s name may be made directly to the Alzheimer Society of Alberta, #201, 770 – 6 Street S.W., Medicine Hat, Alberta, T1A 4J6. (Condolences may be expressed by visiting our website at www.cooksouthland.com) Honoured to serve the family is