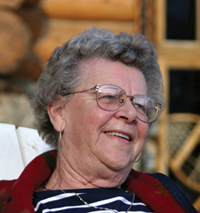 Jean Isobel Cameron died peacefully at Carmel Hospice on September 9 with family at her side. She lived a full and joyful life! She cross crossed the country with the Military as the kids grew, met new friends easily and had many good jobs she enjoyed. She and Jim settled in Medicine Hat in 1975. Mom was always concerned about others first and herself last, right up to the end. She brought so much fun and laughter to those around her, and so loved her pets, especially her final pooch, Buddy.

Mom was President of the Ladies Auxiliary of the Medicine Hat Legion and organized their Poppy Campaign for 10 years. For that role she was awarded her Life Membership in the Legion, an organization in which both her and Dad were very proud.

She missed Dad and her daughter Lesley terribly when they both died in 2014. She filled that vacant hole in her heart with a new family of friends and staff at the Meadowlands, where she enjoyed living from 2015 for 4 years. She loved everyone in her new home and was loved by many and she was grateful for this phase in her life.

She was moved to Carmel Hospice in early August when her lung cancer needed more attention and care. The family thanks the staff at Carmel for their expert, compassionate and loving care they provided.

We also want to thank Dr. Bao Dang and his staff for their excellent care and ongoing concern for Mom over many years in the treatment of her COPD, and in particular, the last six months as the addition of her lung cancer started to interfer. It was exceptional.

Jean was predeceased by Jim and her daughter Lesley in 2014, and an infant son, Stephen in 1962. She is survived by her son Paul (Marie), her daughter Cheryl (Sheldon Spier) and two brothers, Wayne MacTavish (Sandy) and David MacTavish (Judy). She also leaves her grandchildren Eric (Ashley), Terri (Marc), her great-grandchildren Jacob, Fiona, and Alexa and her son-in-law Michael Archambault.

Join us to celebrate Jean’s life, remember her, and perhaps share a story at the Medicine Hat Lodge, Saamis Ballrooms A&B on Fri., Sept. 13 from 11:00 to 1:00pm. A light lunch will be provided.

One Condolence for “JEAN ISOBEL CAMERON”