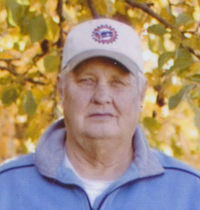 It is with heavy hearts that Barbara announces the passing of her beloved husband, Clifford Merle Traxler at St. Joseph’s Home Carmel Hospice, Medicine Hat on Tuesday, October 1, 2019, at the age of 74 years. Cliff was born in Medicine Hat and raised in the Etzikom district where he attended the Etzikom School. Cliff married Barbara Rose Ellen Heitrich on July 12, 1969. He worked at Cole Farm Equipment for a number of years before farming in the Etzikom area until 1995, when at this time he continued to farm in the Orion area. Cliff enjoyed family functions and usually contemplated what prank he would pull next on the unsuspecting victim. He enjoyed travelling to auction sales and rodeos as well as spending numerous hours either on horseback or working with one of the many horses that had been on the farm. Cliff was a member of the Manyberries Community Assoc. and the Etzikom Roping Club. His memory will be treasured in the hearts of his wife, Barbara; children, Shane Traxler, Vickie Elhart (Arthur Burgess); grand- children, Dylan Seefried, Ryder and Grace Becker; Arthur’s children, Tristen, Teyarah (Chris), Tessa, Teagan; great-grandchildren, Carson, Kinsley, Arya and Heidi. Cliff will also be remembered by his sister, Elaine (Doug) Mueller; brother, Grant (Marie) Traxler and a special nephew, Rick Heitrich and his daughter, Robin Heitrich; niece, Kathy LaChapelle as well as numerous other nieces and nephews. Cliff was predeceased by his parents, Claude and Faith Traxler; nieces, Karen and Laurie; sisters, Grace Tucker, Claudia Halverson and Ruth Webster. The family will celebrate Clifford’s life with a private family gathering at a later date. If friends so desire, memorial tributes may be made directly to St. Joseph’s Home – Carmel Hospice, 156 – 3 Street N.E., Medicine Hat, AB. T1A 5M1. (Condolences may be expressed by visiting our website at www.cooksouthland.com) Honoured to serve the family is