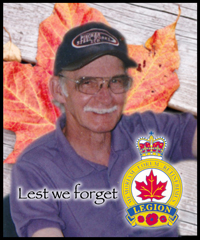 Terrance “Terry” Maxwell, beloved husband of Carol Maxwell, passed away at the Bow Island Health Centre on Wednesday, October 2, 2019. He will be greatly missed by his son, Steve (Char); daughter, Twila (Gerry); precious granddaughter, Calli; brothers, Barry (Patty) and David (Joanne) as well as Carol’s family, Kathy (Bob) Gauthier, Dave Mayer and Tracy (Sherry) Mayer as well as numerous nieces, nephews and extended family members. He is also survived by family members from his first marriage. Terry was predeceased by his parents, Henry ‘Harry’ and Ruby Maxwell; Carol’s parents, Wally and Vera Mayer and by his sister-in law, Linda Mayer. Terry was a life member of the Royal Canadian Legion, a 30 year volunteer of the Bow Island Library’s Children’s Festival and a volunteer of the Bow Island/Burdett Chamber of Commerce. Terry also served on the Library Board and the Municipal Planning Commission. The family is honoured to have Cde. David Hyland conduct a graveside Poppy Service in the Field of Honour at Hillside Cemetery in Medicine Hat on Thursday, October 10, 2019, at 2:00 p.m. For those wishing to attend, the procession to Hillside Cemetery will depart from Cook Southland Funeral Chapel, 901 – 13 Street S.W. at 1:50 p.m. Dress is casual or Legion or Military uniforms. Donations in memory of Terry may be made to the Bow Island Municipal Library, Box 608, Bow Island, AB, T0K 0G0 or to the Bow Island Legion Br. 197, Box 749, Bow Island, AB T0K 0G0. (Condolences may be expressed by visiting our website at www.cooksouthland.com) Honoured to serve the family is