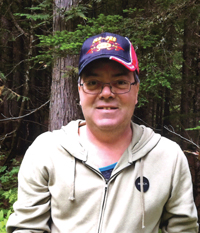 Dale Lyle Lambert, beloved husband of Frances Lambert of Medicine Hat, passed away on Sunday, October 6th, 2019 at the age of 55 years. Dale also leaves to cherish his memory his children, Jessica (Jon) Harty, Ali (Donald) Milton and Nathan Lambert; one grandson, Weston Dale Donald Milton; his parents, Maurice and Reta Lambert; brother in law Victor Kryzanowksi, his siblings; Leslie (Marie) Lambert and Michelle (Dean) Ruston; as well as numerous nieces and nephews. Dale was predeceased by his grandparents; uncle, Ken; aunt, Paulette; and close friends, Greg (Howie) Kuny and Charlene Ackerman. Dale was born on January 20th, 1964 in Tisdale, Saskatchewan. He married Frances on May 22nd, 1993 in Calgary. Dale’s passion was his wife, children and grandson; family was the most important thing to him. He was well educated and always advancing his education. Dale was a welder most of his adult life and a welding instructor from 2002 – 2011, teaching many students over the years. He was a jack-of-all-trades who could fix almost anything. Dale finalized his dream of opening his own business, Dynasty Custom Welding. He loved the outdoors, especially fishing and hunting. The family would like to send a special thank you the doctors, nurses and staff of the Medicine Hat Regional Hospital and St. Joseph’s Carmel Hospice for their kindness and compassion. Those wishing to pay their respects may do so at SAAMIS MEMORIAL FUNERAL CHAPEL, 1 Dunmore Road SE, on Thursday from 7:00 until 9:00 p.m. The Funeral Service will be held at SAAMIS MEMORIAL FUNERAL CHAPEL, on Friday, October 11th, 2019 at 2:00 p.m. with Gary W. Goran officiating. A private Interment will follow at Hillside Cemetery. Condolences may be sent through www.saamis.com or to condolences@saamis.com subject heading Dale Lambert. Funeral arrangements are entrusted to

Leave a Condolence for Caren Muzyka