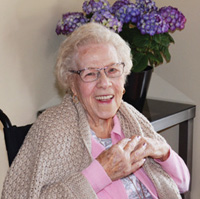 It is with great sadness, the family of Anne Bailly wish to announce her passing on October 6, 2019 at the Grande Prairie Care Centre at the age of 92 years. She was born on February 3, 1927 and spent the majority of her life in Patricia, before retiring to Medicine Hat and then to Grande Prairie.

She was a loving, energetic, hard working, optimistic person who was able to connect with anyone. Anne and Les operated Bailly’s General Store for many years; she was also the postmistress in Patricia and community correspondent for the Brooks Bulletin. After selling the family store they moved to the farm. She always enjoyed music, dancing, traveling, playing cards and socializing with others. Anne lived a long and fulfilling life and had no regrets. She was a loving wife, mother and grandmother.

She leaves to mourn her passing, her children: Sharon Peterson (Don) and John Bailly (Simone); her grandchildren: Chris, Ryan (Rilla), Sarah (Curtis) and Reed; two great-grandchildren: Sophia and Amara; as well as her sister, Mabel LeBlanc.

A Celebration of Anne’s life will be held at the Brooks United Church on Friday, October 25, 2019 at 1 pm.

In lieu of flowers, memorial donations can be made directly to the Canadian Cancer Society,55 St. Clair Avenue West, Suite 500, Toronto, Ontario M4V 2Y7 or charity of one’s choice.