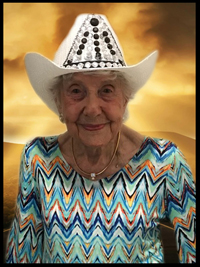 It is with great sadness that the family announces the passing of Edna on Saturday, October 12, 2019, two weeks after her 95th birthday. Edna was born in England in 1924, a daughter to proud parents, Simeon and Cissy Elsworth. During WWII while still in England, she met the love of her life, Ed Fedorwick, who was posted there with the RCAF. Soon after that, they were married. After the war ended, Ed was sent back to his hometown in Moose Jaw. Edna then followed closely behind in 1946, with their newly born son, Martin. While living in Moose Jaw, Ed and Edna became the proud parents to three more sons, Stan, Graham ‘Scotty’ and Rick. In 2009, Ed passed away and two years later Edna moved to Medicine Hat to be near her family. She met new friends in Medicine Hat, where she and several other war brides got together regularly for outings and socializing. Edna also became a member of the Red Hat Ladies Chapter and they would meet to experience different restaurants and events. Edna lived a rich and full life and will be missed by family and friends. She was predeceased by her her loving husband of 65 years, Ed; her parents as well as her sons, Martin and Graham ‘Scotty’. Edna is survived by her sons, Stan (Val) and Rick; eleven grandchildren as well as numerous great-grandchildren. As per Edna’s wishes, she will be silently remembered without the proceedings of a formal funeral service. She will be placed to rest alongside Ed in Moose Jaw at a later date. (Condolences may be expressed by visiting our website at www.cooksouthland.com) Honoured to serve the family is