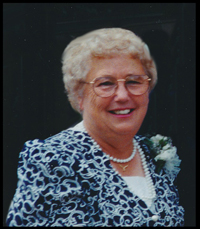 Gwen Bearham (nee Baker) passed away at St. Joseph’s Home – Carmel Hospice in Medicine Hat on Sunday, October 20, 2019. Gwen is survived by her loving husband, Frederick Bearham; sister, Sheila Fibich (George); niece, Julie Gerow Aherne; nephews, Michael Aherne (Gisele) and Patrick Aherne (Allison) as well as numerous grand nieces and nephews. She was predeceased by her parents, John Archie and Juliana Baker; brother-in-law, John Aherne and nephew, Brian Aherne. Gwen had an independent spirit and lived an active, adventurous life. She was raised in Edmonton, graduated from East Glen High School and was among the first young women in Canada to earn a pilot license through Royal Canadian Air Cadets. Gwen and Fred were members of the Edmonton Ski Club, co-founders of the Edmonton Water Ski Club and avid life-long golfers. Gwen’s career was one of service to others. She was assistant to the Postmaster of Edmonton, leaving that role to attend the University of Alberta where she earned a chemistry degree. Gwen then served as assistant to the Provincial Analyst of Alberta prior to obtaining her teaching credentials in the late 1960’s. She later taught International Baccalaureate Chemistry at McNally High School in Edmonton until her retirement in 1986. Gwen and Fred enjoyed 33 years as “Winter Texans” and spent summers with family and friends, first at their Jack Fish Lake cottage and later in Medicine Hat. Fred and his family express deep gratitude to the many compassionate people who supported Gwen through a period of serious illness and dying. As per Gwen’s wishes, her life will be honoured and her memory cherished without the proceedings of a formal funeral service. Memorial donations in Gwen’s name may be made directly to Covenant Health, Carmel Hospice 156 – 3 Street, N.E., Medicine Hat, T1A 5M1. (Condolences may be expressed by visiting our website at www.cooksouthland.com) Honoured to serve the family is