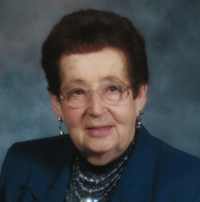 Vivian Stuber, beloved wife of the late Emil Stuber, passed away October 20, 2019 at the age of 93 years. She leaves to cherish her memory her three sons; Stan (Bev) of Medicine Hat, Barrey (Linda) of Summerville, NFLD, and Wes (Carol) of Medicine Hat; six grandchildren; 11 great grandchildren; and seven great-great-grandchildren; as well as numerous nieces and nephews. She was predeceased by her biological mother, Lottie Baaske; adopted parents Femmie and Henry Kakkinen; two brothers; one sister; grandson, Dean in 1988; son in-law, Herman Dupmeier in 1996; husband, Emil in 2005; and daughter Shirley in 2009. Vivian was born in Edmonton, AB on March 22, 1926 to Lottie Baaske and at three months of age she was adopted by Henry and Femmie Kakkinen of Manyberries. She was named Vivian Ardella Kakkinen and received her education at New Home School. On April 6, 1943 she married Emil Stuber. Together they farmed and ranched in the Manyberries area until moving into their home in Medicine Hat in 1981. Vivian worked alongside Emil, cultivating, combining, etc. until the boys got big enough to take over, though she still helped on the farm driving the Peterbuilt truck and trailer hauling hay bales off the field well into her 80’s. She was very active in the community, organizing the New Home and Manyberries School Homecomings. She was president of the Manyberries History Book Club and along with many others published the Manyberries Chinook history book. She loved the outdoors, planting her flower and vegetable gardens, and was very proud when she and Emil won a Farm Beautification award in 1976 from County of 40 Mile. She and Emil enjoyed travelling, especially to Hawaii; Alaska by motorhome; and numerous other trips. The Funeral Service will be held at VICTORY LUTHERAN CHURCH, 2793 Southview Drive SE, on Friday, November 1, 2019 at 11:00 a.m. with Pastor Jim Bredeson officiating. Memorial gifts in Vivian’s memory may be made to H.A.L.O., 12 – 49 Viscount Avenue SW, Medicine Hat, AB T1A 5G4. Condolences may be sent through www.saamis.com or to condolences@saamis.com subject heading Vivian Stuber. Funeral arrangements are entrusted to